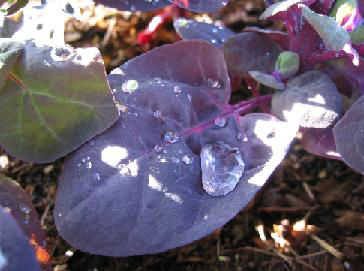 It’s sort of mean that we can’t grow salad greens in the summer here in So Cal.  It’s too hot and they bolt to seed so quickly.  I’ve tried growing lettuces under shade cloth and that helps a lot, but it’s nowhere near as delicious as fall-grown salad greens.  One way to combat the heat is to grow slow-bolt or heat tolerant varieties.  Another is to try something completely different.

I know I’ve talked about this fantastic green before, but I’m going to expound on the wonders of Orach again because this year was particularly satisfying in watching it grow, although not entirely from the beginning.  After seeding half a raised bed with Orach seed, the birds or sow bugs took most of the sprouts home for a snack.  The two remaining plants, however, produced enough spinach to keep our salads interesting all summer long.

For those who are thinking, “What the heck is Orach?” let me esplain…

Orach (pronounced OR-ack) Mountain Spinach or Garden Orache (A. Hortensis) is in the same family as Amaranth, but it is grown for its leaves rather than the grain heads.  It is heat tolerant and is relatively similar in taste and texture to spinach.  It is darker in color, usually a red-tinged leaf and stem, and has a slight lemony taste.  It can be eaten raw (my favorite) or cooked.

Not only does it solve the hot summer wilted spinach problem, but it’s a beautiful addition to any summer garden.  Once it goes to seed, the crimson seed spikes reach 6 feet in height and blow gently in the breeze.  Soon the seed spikes start to turn brown and it’s time to cut the spikes and save the seeds.  The one below is nearly 2 feet long. 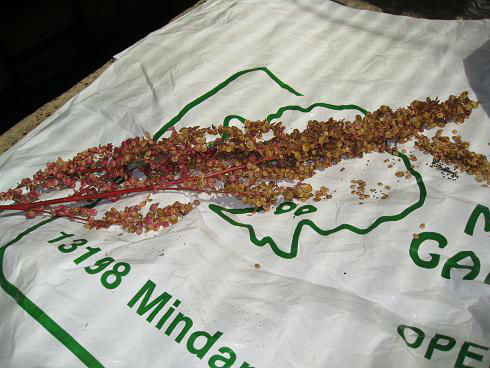 I’ll admit, we had a moment of confusion.  The seeds are wrapped in a round papery layer that reminds me of parsnips.  They also remind me of some previous Orach seeds I purchased years ago which had that papery layer around the seeds.  The confusion came when I opened the existing seed packet of Orach – the one that grew these seeds – and saw that only the little black seeds themselves were in the packet. No papery outer layer. 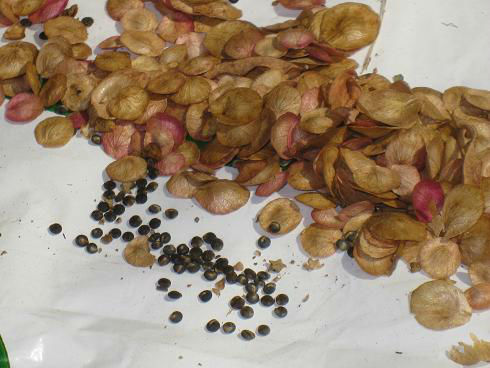 A brief investigation online showed that most people leave the papery layer on their seeds and plant them that way.  That’s really good news, because as much as I love to save seeds, I really don’t like winnowing and threshing.  But either way, it works.

From these two plants, I’m guessing we’ll save about a quart-sized zip lock bag filled to the brim with seed.