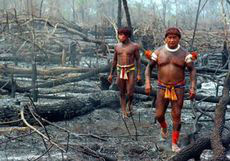 In an effort to read more into the recent rumor (or ‘myth’ as the Organic Consumers Association (OCA) has put it) about HR 875 and the idea that it would ban organic farming, I found that the OCA website has been either hacked or blocked by every major search engine out there.  It smells of conspiracy, since they are the voice of the people when it comes to organic standards and food safety.  Not that I’m a conspiracy theorist, but I thought it was uncanny that while e-mails are flying around about this bill, the site with the most information has been blocked as a spam site.  I’ve been getting newsletters from OCA for years and it seems to me that there might be some foul play here.

I went to the website, through the warnings of being hacked, read the report from Google about why they considered it a spam site (only 1 out of 90 attempts to reach the site resulted in an unauthorized download) and made the assumption that it was probably okay to proceed.  I have decided to post a recent article from their site on the Gardenerd blog, so that you don’t have to go through that.  I’ll keep you posted on the status of the site.

HR 875 Update: The Biotech Companies are Destroying Traditional Farming (Just Not in this Bill)

The following note is typical of the calls and e-mails Organic Consumers Association has been receiving this week:

“Do
you know anything about HR 875, a ‘food safety’ bill that was written
by Monsanto, Cargill and ADM? I’ve heard a few individual activists
scream about this as the death of farmers markets, CSAs and local
organic food, yet have seen no alerts from any of the reliable groups,
including OCA. Any idea what’s up with this?”

HR 875 is a food safety bill that, as it is currently drafted,
could be applied to all farms, including certified organic and
farm-to-consumer operations. The bill would require farms to have a
food safety plan, allow their records to be inspected, and comply with
food safety regulations.

For the record, Organic Consumers Association does have an alert on HR875.
As OCA points out in our Action Alert, we cannot support a “food safety”
bill unless it provides protection or exemptions for organic
and farm-to-consumer producers and cracks down on the real corporate
criminals who are tampering with and polluting our nation’s food
supply.

Having
said that, OCA supports aspects of HR875 that call for mandatory
recalls of tainted food, increased scrutiny of large slaughterhouses
and food manufacturers, and hefty fines against companies that send
poisonous food to market. The now discredited ultra-libertarian notion
that companies or the “market” will regulate themselves is not only
ludicrous, but dangerous, whether we are talking about the banking
system or the food and farming sector.

When researching this issue,
Organic Consumers Association turned to trusted sources within the
organic farming community. We suggest the following resource for
further reading:

Letter from the Farmers Market Coalition on HR 875
graysriver.grange.wahkiakum.info/grays_river_grange/2009/03/-hr-875-the-food-safety-modernization-act-of-2009.html)”

To get a sense of the food safety issues that Congress is trying to
deal with, read Jill Richardson’s (La Vida Locovore) write-up of a
March 19, 2009, hearing in the House Energy & Commerce subcommittee
on Oversight & Investigations on the salmonella peanut butter outbreak
:
http://www.lavidalocavore.org/showDiary.do?diaryId=1241

Of course, Monsanto and large corporate agribusiness are out to
destroy
traditional farming. Unfortunately, while many people have been
distracted by HR 875, the biotech companies have been hard at work
pushing their agenda (see below). We need to keep working together to
work towards positive alternatives, such as organic agriculture and the
green economy.

A ban on rBGH-free labeling from Monsanto’s successor Eli Lilly
A bill that is working its way through the Kansas legislature would prevent
farmers from labeling any dairy products sold in Kansas as being “free”
of genetically modified bovine growth hormone (rbST or rBGH). Farmers
could say that the product comes from cows that haven’t received
injections of the artificial bovine growth hormone, which stimulates
milk production (and increases the use of antibiotics and the presence
of pus in milk). However, such products would also be forced to include
disclaimers saying that the federal government has found no significant
difference between milk from cows injected with rbST and milk from
those that have not received the hormone. While there is an exemption
for certified organic milk, OCA opposes this law. It has Monsanto’s
fingerprints all over it. The revolving door that brought Monsanto
executives through the FDA is the reason the federal government took
the position that there’s no difference between milk produced with or
without rbST. Monsanto sold rbST to Eli Lilly in August 2008, but the
pro-rbST strategy hasn’t changed much.

Monsanto uses closed-door lobbying to block Montana bill that would protect farmers
Montana Senators sidelined a seed bill that sought standards for
how biotech companies test crops for patent infringement, burying the
bill after getting a private dinner with Monsanto
representatives.

Epitopix’s E. coli vaccine
A vaccine for E. coli has been conditionally approved by the USDA. Now
the USDA can force this new animal drug on all beef and dairy producers
rather than focus on the cause of E. coli and its spread, feeding cows
grain instead of grass, confining cows in pens where they wade in
manure their whole lives right up to slaughter, and the manure lagoons
that leak into the water and onto nearby vegetable farms.

Monsanto’s gene-altered drought-resistant corn
The
chemical companies have yoked farmers with increasingly expensive and
ineffective fossil-fuel-based inputs that contribute to global warming.
Now they propose another techno-fix: gene-altered
drought-tolerant crops. Trouble is, the crops don’t do well under
non-drought conditions. Monsanto invests $2.6 million daily in its
research. Think how many people could be eat healthy food on long-term,
sustainable basis if Monsanto and its partner the Bill & Melinda
Gates Foundation invested $2.6 each day in organic agriculture!

Indian farmers protest Monsanto seed experiments that threaten their farms
One farmer said, “Monsanto is a criminal corporation known to have sued or sent to
jail scores of farmers elsewhere for doing what farmers around the
world have done for millennia — saving their seeds.”