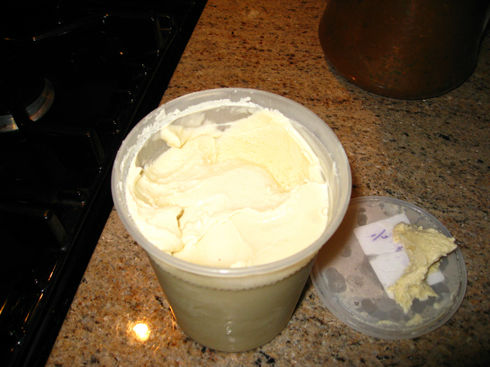 My first experience making lavender ice cream several years ago did not end well.  As mentioned in a previous blog entry, I somehow released all the camphor in the blossoms and ended up with Vicks Vapo-Rub ice cream.  Since then I’ve vowed to attempt another batch, but it wasn’t until our trip to Ojai in June that I discovered what to do differently. In case you missed that trip to the U-Pick day at New Oak Ranch you can read about it here and learn a little more about the different varieties of lavender – and which ones to cook with.

A friend gifted me with a book called Lavender Cuisine, by Judi and Jim Brady from Rusty Acres Herb Farm 5 years ago.  The page has been bookmarked for lavender ice cream since then.  So, having dried out my U-Pick lavender from New Oak Ranch, I was ready to try again.

Heat the cream, half and half, and lavender in a saucepan over medium hear until warm
Cover and steep 30 minutes (heat off)
Whisk egg yolks and sugar until pale yellow and a ribbon forms when dripped from a spoon
Whisk a small amount of warm cream into the yolks, then return to the saucepan
Cook, stirring, over medium heat until mixture thickens and coats the back of a spoon, about 5 minutes
Strain mixture through a fine sieve and discard lavender blossoms
Cover and refrigerate for at least an hour to chill
Freeze in an ice cream maker according to manufacturer’s instructions

Half a cup of lavender blossoms seemed like a little much to me, but I did it anyway. I didn’t chop them – I wasn’t taking any chances on releasing any camphor.

After mixing in the custard and bringing the pan close to a boil, the mixture finally thickened.  I have read that boiling lavender or steeping it too long can impart a bitter flavor so I removed it immediately when the texture changed.

Here’s what it looks like after it’s been strained:

I chilled and froze and this is what it looked like in the end.

1/2 a cup is too much lavender if you picked it yourself two months ago.  While dry lavender is less potent than fresh, it appears that freshly dried lavender is pretty darn strong anyway.  It definitely came out right – no Vapo-Rub ice cream this time – but I would use less than half the amount next time.

I might try steeping it for less than 30 minutes as well, since we ended up with a little bitterness, but not enough to make it unpalatable.

To solve the problem, I cut the lavender ice cream with the same amount of vanilla ice cream (just happened to have some in the freezer).  Mixed equal parts of the two ice creams together and – Perfect!

What’s your experience cooking with lavender?  Share it with us here.

Local Organic Blueberries – Get ’em at the Patch