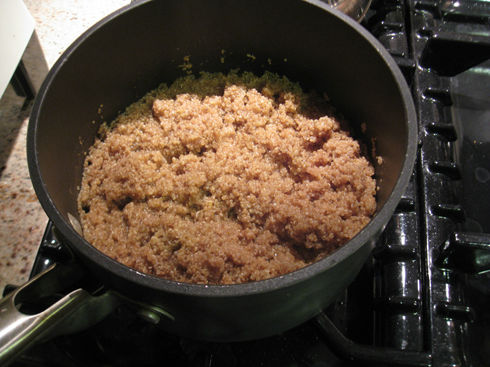 This is our second year growing quinoa, and it occurred to me that I hadn’t documented the process yet.  So – without further delay…

How to grow quinoa:

The first thing you need to know is that while quinoa seed heads are covered in saponin (a natural soap that keeps birds from eating them), the seeds that you plant are somehow going to be completely appetizing to birds in your garden.  So you might want to consider either starting them from seed indoors, or covering your seeded area with a garden fabric, also known as floating row cover.

In our first year of growing quinoa, the birds got all but 2 sprouts, which grew big and tall and produced nearly a pound of quinoa all by their lonely little selves.  This year I used floating row cover and successfully germinated and grew 14 or 15 plants in a 4×4 square foot area. 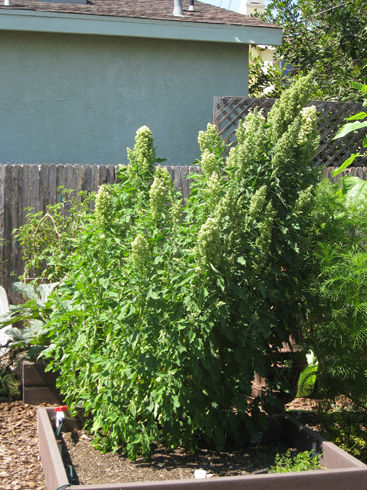 Quinoa looks a lot like a weed when it germinates – that’s because it’s in the same family as lambsquarters.  So resist the urge to pull it up. When it grows big and tall, it forms seed heads like this: 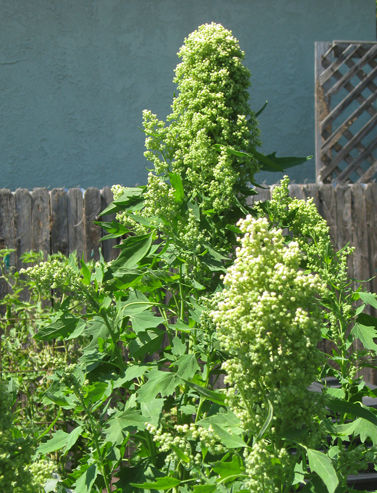 Then when it starts to dry out, the leaves turn yellow and the quinoa turns any color between yellow-orange, deep rust, or brown. 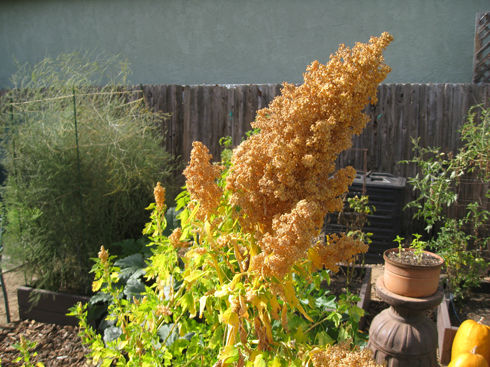 Once the leaves have fallen off the plant, it’s ready to harvest.  Cut the seed heads off and continue to let them dry indoors on a screen or tray.  Below is this year’s harvest: 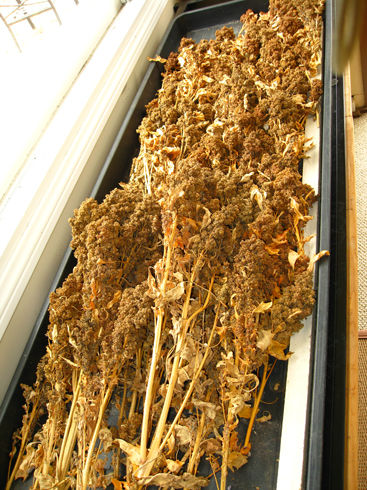 Then when it’s really dry and brittle, you simply rub it between your hands into a bucket or paper bag.  All the quinoa falls off easily. 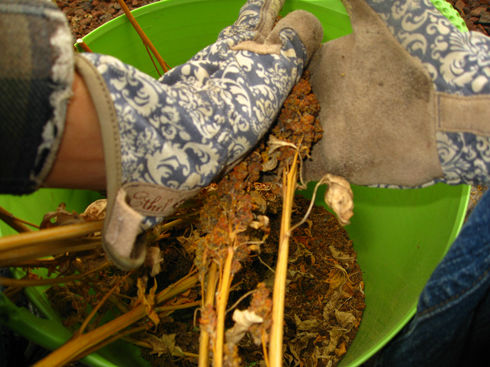 I took this picture with the camera held between my knees using a 10 second timer.

Next comes winnowing, which can be easy or hard, depending on what kind of equipment you have.  Ideally, you would place the fan on a chair, place the bucket below the fan, and pour the quinoa from one bucket to the other. The chaff will blow away and the quinoa will fall into the bucket below.  If the fan is on too high, you’ll blow some quinoa away too.  Then next spring you have quinoa growing all over that area.  Trust me, you will.

If you have a screen that is slightly bigger than the mesh of a window screen, your quinoa will pass through that and the chaff will be left behind.  In the end, you will still have some twigs and such in the finished product: 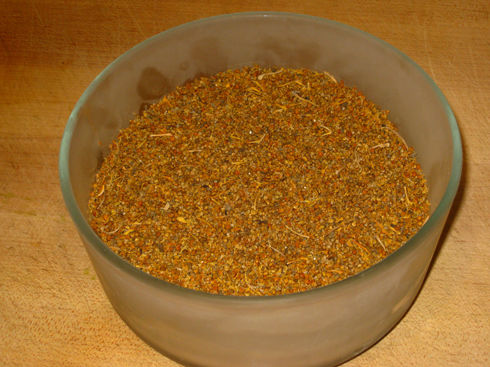 To kill off any bugs or bug eggs, put the grains in the freezer for a few days.  Then store it in a mason jar in the pantry.  Before cooking quinoa, you have to wash off the saponin – yes, it’s still there.  Rinsing the grains several times in bowls of water using agitation (rub them between your hands) will release the soap.  All those twigs and extra chaff will float to the top. Scoop it off and drain the water.

Then you’re ready to cook it.

It’s a little darker than the store bought stuff, but I’m guessing that they use “something” to clean off the saponin and bleach the grains a bit for cosmetic appearances.  Can’t be too sure though.  In the end, it’s very satisfying to grow, and the compost bin is happy with all the biomass that the plant provides after it’s grown.

Do you have a quinoa story?  Share it with us here.

When Life Gives You Lemons