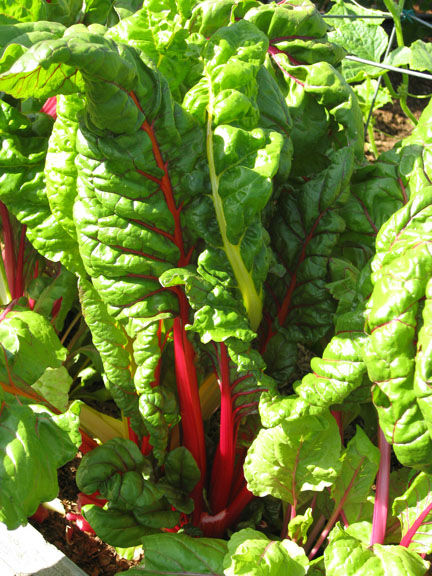 When a gigantic bouquet of Swiss Chard appeared on the porch the other day, an image of the jam-packed fridge came to mind.  This was going to require some thinking. It was time to pull out the big guns, and by “big guns” I mean that it was time to ask the Gardenerd Community for help.

I put a call out in the last Weekly Update and got a couple of good recipes from fellow chard lovers.  Here are two from a local gardenerd, Loree.  It came to her from Health.com:

1. Whisk together the first 5 ingredients (through olive oil) in a large serving bowl. Add remaining ingredients to dressing, and toss well to combine. Divide salad among 4 salad plates, and serve immediately.

Loree sent along another recipe that she got from a friend:

Keeps up to 2 days refrigerated.

I keep the dressing separate and it keeps for 2 weeks (by my standards!).
I mix all sorts of other veggies like cucumbers, greens, green beans, black beans, etc.
This one is really really great.

Thanks, Loree, for sending those in.

Another great recipe that I’ve posted before is for a Swiss Chard Frittata by Rose Elliot.  You can find that blog entry here:

And finally, my standard way to use chard is really easy and came from Carrie, a fellow Ocean View Farms gardener who posted it as a comment a couple of years ago:

TA-DA!  Fabulously tasty with just about anything (or all by itself eaten straight out of the pan…did I say that out loud?)

If you have a great chard recipe, share it with us here.

Ask Gardenerd: Corn is Falling Over