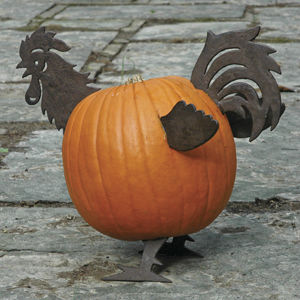 Since we had a mournful year for squash in coastal California, we have no pumpkins from the garden to carve (this is a far cry from last year), so I’m particularly longing for a pile of pumpkins of all shades and sizes to decorate the porch and dining table.

Now, I’ve sworn to leave all things “crafty” to the queen of that skill set – Martha Stewart – and there’s a good reason for it, but I would like to share some ideas on pumpkin carving for the sake of inspiration. Last year, as noted in the link above, we had a plethora of pumpkins to choose from, and I had a fancy idea that almost…almost worked out according to plan.  But first a little back story.

A friend gave me a set of cast iron cat parts – arms, legs and a head.  The suggested use for this product looks something like this except that it’s a cat:

My fancy idea was to carve the pumpkin to look like the arched part of a traditional Halloween black cat’s back, and light the pumpkin from within. In the end, a taller pumpkin might have been more appropriate, but the effect was almost what I wanted.

The pumpkin on the far right is my fat cat pumpkin.  The key is to light the pumpkin from behind as well as inside so you can see the silhouette of the cat parts.  Oh – and put the lid on.  That will help too.

When you carve a pumpkin walls thin enough to have light pass through, it makes it almost too thin to hold on to the heavy cast iron bits.  I think I came out several times during the evening to put the tail back on.

The other pumpkins in the picture were done by friends with more artistic talents: the happy goat pumpkin, Mr. Bill pumpkin, and African goddess pumpkin.  As opposed to mine, their pumpkins did not collapse by night’s end… I may try again this year, or just quit while I’m ahead.  What do you think?

If have any ideas for solving the fat cat pumpkin situation, let me know.

Podcast: The Biggest Little Farm with John and Molly Chester