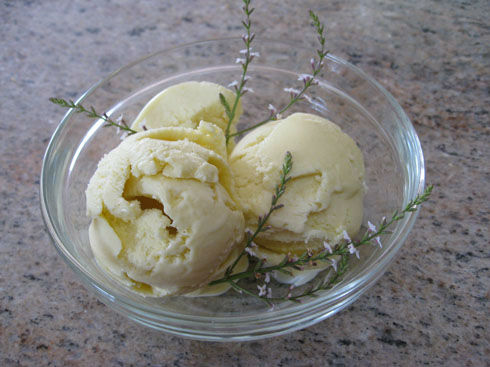 Cooking jags strike without warning, and when combined with the innocent act of pruning the lemon verbena plant out front, it makes for a delicious combination. Lemon verbena is one of those romantic herbs that I imagine Victorian women picked as they walked through the garden and rubbed onto their pulse points to carry the fragrance with them all day.  It’s lemony, but floral. 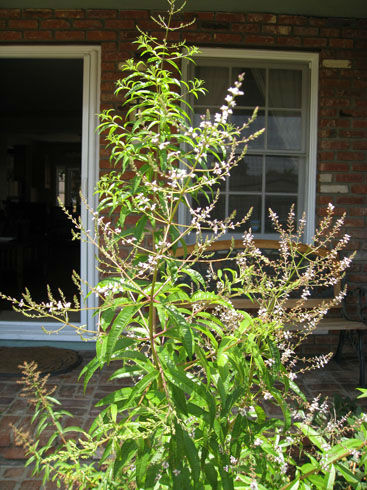 Lemon Verbena is usually dried and used in tea, but adventurous cooks use it in other dishes with fish, chicken and breads. We at Gardenerd are generally drawn toward any ice cream recipe, so that is indeed what we did. We found a popular recipe from Claudia Fleming’s Last Course

that was adapted by Dessert First.  It goes something like this:

Combine the milk, cream, 1 cup sugar, and lemon verbena leaves in a
heavy saucepan. Heat on medium-high until the mixture reaches a simmer.

While the mixture is heating, whisk the egg yolks and 1/4 cup sugar together in a large bowl until smooth and thick.

Remove the milk mixture from the stove and pour a little into the
eggs to temper it, whisking constantly. Pour the eggs into the milk
mixture, whisking all the time, and put the saucepan back on the
stovetop.

Cook the mixture over low heat, stirring constantly with a wooden
spoon. When the mixture has thickened enough so that it coats the back
of the spoon and can hold a line drawn through it, remove from the heat.

Pour the mixture into a clean bowl and let cool. Strain to remove any
lumps and then cover the mixture with plastic wrap and let chill in the
refrigerator for at least 4 hours, preferably overnight.

Freeze in an ice cream maker per manufacturer’s instructions.

This will keep in the freezer for about a week. 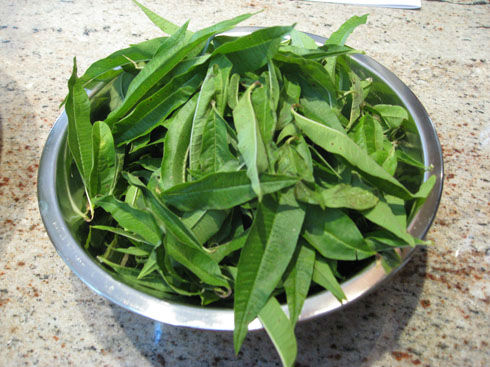 This is what 1 oz of lemon verbena leaves looks like 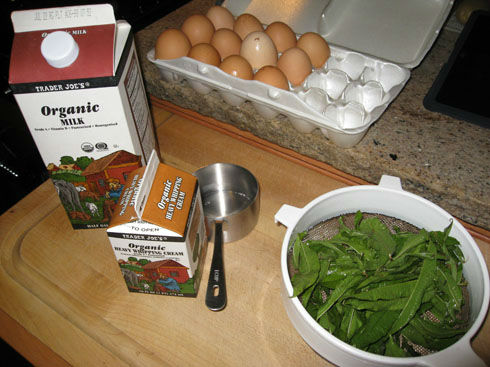 Other ingredients – all organic if possible 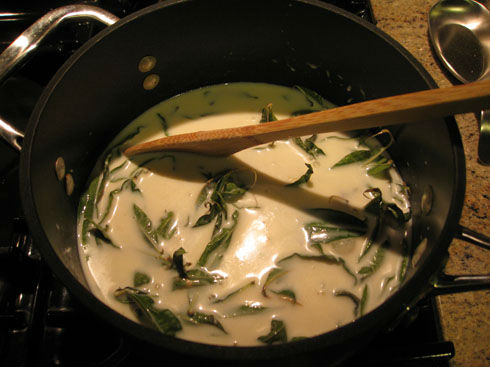 Sort of sinister looking, but lemon verbena holds its shape when simmered in milk

Now, I ran across a few problems, as per usual when I cook.  For example – the instructions do not indicate when to remove the leaves.  It actually makes it sound like the leaves remain in the milk long after the eggs are added in, and after the mixture has thickened.  I took the liberty of straining out the leaves before adding the eggs.  That worked out just fine. 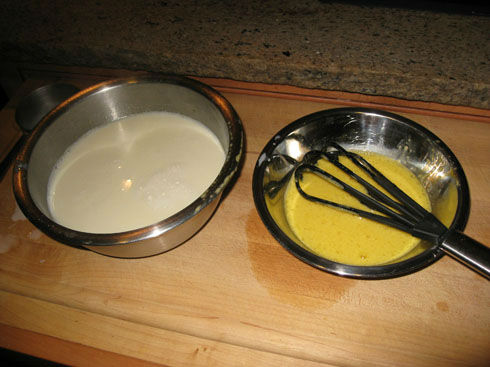 In order to incorporate the eggs, we first added some of the hot milk mixture to the eggs to bring them slowly up to temperature. Then we returned the strained milk to the pan and beat in the eggs.

This is where I encountered another concern with the recipe.  It instructs to heat the custard until it coats the back of a spoon, AND holds a line when drawn in it.  Well, let me tell you – it coats the back of a spoon WAY before the mixture holds a line.  My custard started to curdle because I kept waiting for that magic moment.  As a result, it was so thick that I did not strain the mixture before freezing as recommended. 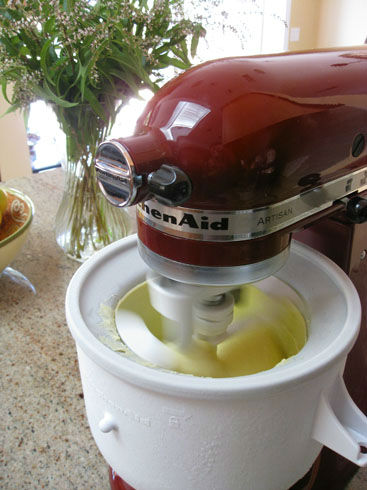 Gotta love Kitchenaid and their fangled attachments
In the end, it came out wonderfully. No lumps, no evidence of foul play. And the taste – decadent floral lemony goodness:

Lemon Verbena ice cream with a few flowers for show.

The same day we made this, we went to an ice cream shop that features hand-crafted artisan ice creams, and guess what their featured flavor was that day – Lemon Verbena!  Theirs was $5 a scoop, and ours (a quart or so) was much less -about $.50 per scoop.

A Visit to the Solar Living Institute