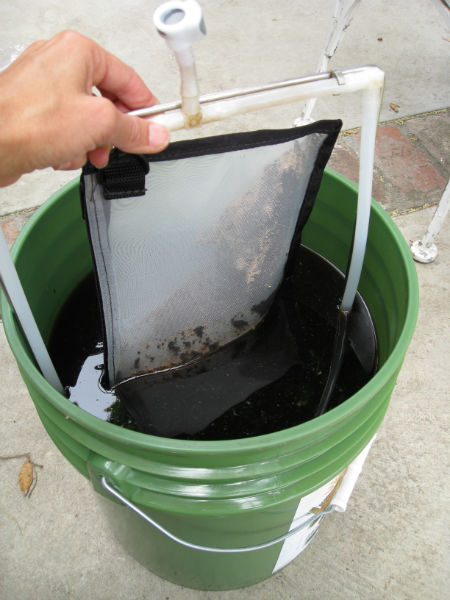 Last week we got up close and personal with compost, or more specifically the microbes in compost. Now that we’ve determined that our compost is biologically active and suitable for brewing compost tea, we took the plunge.

Earlier this year we received a compost tea brewer as a gift (and a great one at that – thanks Mom and Dad!). The brewer pumps air bubbles into the water to keep it oxygenated and promote the growth of the right kind of bacteria: aerobic. Without oxygen, the chances of breeding anaerobic bacteria (the stinky kind) are high.

But let’s back up a minute. Let’s go over some terminology:

Actively Aerated Compost Tea (ACT)- compost tea is “actively aerated and agitated with bubbles to prevent anaerobic conditions,” according to Matt Slaughter of Earth Fort. It also uses ingredients (shown above) to feed the microbes so they multiply.

Extraction – still brewed in aerobic conditions, no food is added, so you are just extracting the existing microbes from compost.

Non-Aerated Tea – brewed without bubbles (just soaking a bag of compost in a bucket of water) and often breeds anaerobic bacteria. There are some studies showing that anaerobic bacteria can be helpful in some situations, as with Bokashi which is used to clean up toxic spills. The debate between aerated and non-aerated teas goes on, but generally speaking you don’t want anaerobic bacteria in your compost tea.

Now that we’re clear on terminology, we’re brewing ACT with compost that was proven to be highly biologically active.

We start, of course, with filtered water. We put the bucket in the sink and filled it up. Next, we played around with the suggested recipe.

The ingredients serve several purposes. You start with compost, which hopefully is full of microbial life: bacteria, fungi, protozoa, beneficial nematodes, etc. Fish hydrolysate is food for fungi. Humus or humic acid is microbial food and is high in nutrients. It can also neutralize chlorine and chloramine. Kelp feeds microbes, improves soil structure and provides potassium. It also increases nitrogen availability to plants.

We opted for a vegetarian substitute for fish hydrolysate, a product called Soil ReVive sold by EarthFort.com. We had some humus on hand that we added to our compost for good measure, and we added insect frass (frass=poop) instead of SOLU-PLKS, which is known to be a fungal food to some degree. It’s all one big experiment.

The brewer comes with a mesh bag into which we put compost, humus, and insect frass. Into the bucket of water we mixed kelp and Soil ReVive. Next, we snapped the bag into the metal frame and placed it into the bucket.

The only thing left to do it turn it on and wait. We connected the pump to the tubing after putting on the lid. Let the brewing begin!

The next day, we turned off the pump, lifted the lid and revealed this frothy result:

Foam happens, so you can just scoop it off. We took a sample of our compost tea over to Compost Teana and checked it out under a microscope. The result: plenty of microbial activity–SUCCESS!

To Use – compost tea can be diluted anywhere from 3:1 to 10:1 and sprayed over soil and foliage, or used as a drench. It can also be used undiluted. Remember, it’s not a fertilizer (even though there are some nutrients in the brew). “Compost tea in an inoculum,” says Alane Weber, composting guru. So you can’t overdo it.

We used the compost tea full strength. We’ll report back our findings as the season progresses.