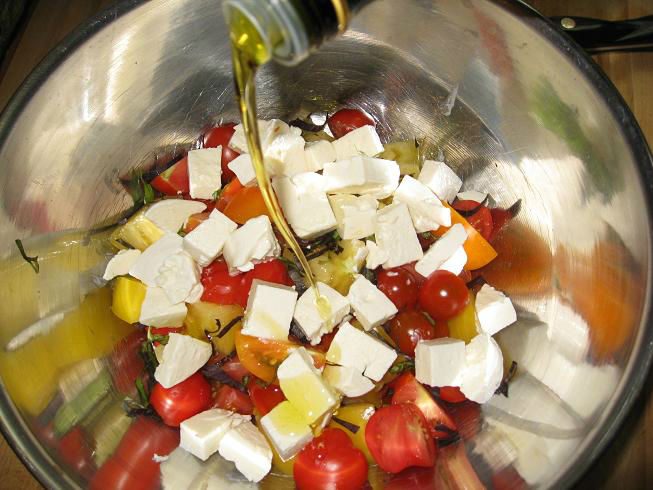 Since the garden is pretty much doing its own thing these days, we tend for focus more on the bounty of the harvest than the growing of plants (which is just as exciting anyway).  Last week, I went on a cooking spree to use up some tomatoes and zucchini.  I don’t know what came over me exactly, but in the course of a couple of days I made stuffed zucchini, tomato cobbler (a Martha Stewart Recipe that Evan Kleiman posted on Good Food), chocolate zucchini bread, and home made mozzarella for a caprese salad that’s as close to home grown as it could be without having livestock on the property. I also processed the leftovers from the mozzarella and made some ricotta that will be used in lasagna this week.

I think the spree is over for awhile, but it was sure fun while it lasted, I think mostly because of the fact that most of the ingredients came from the garden.  How often do we get to say that as we sit down to the table for dinner?

We’ll be covering some of the above mentioned dishes in future blog entries, but front and center today is the cheese.

I can’t say I’m a pro at making cheese.  In fact this batch came out a little gummy, but all in all, it’s still very exciting to make you’re own cheese.  A while ago, I came across Cheesemaking.com, the home of the New England Cheesemaking Supply Company.  I found them via an article in Mother Earth News in July of 2008.  I decided to order the supplies for making their 30 minute mozzarella recipe, which included cheese salt, vegetarian rennet, a thermometer, and citric acid.  All I needed was a gallon of organic milk.

I won’t bore you with the details, because you can find the recipe on cheesemaking.com and make your own here.  But the idea is that once you bring the milk to temperature and add the citric acid and rennet, you scoop out the curds and kneed them like dough until they stretch.  I wasn’t able to complete the process in 30 minutes, but it didn’t take much longer.  I used a pair of latex dish-washing gloves to handle the hot cheese while kneading, and the microwave to heat the cheese back up to temperature between kneading (they have instructions for folks not using a microwave too).

The end result is a sense of pride in having resurrected the ancient art of cheese making – that, and a nice caprese salad:

A little drizzle of olive oil, home grown tomatoes (there are 4 or 5 different varieties in the bowl) some home grown basil, salt, pepper and home made mozzarella.  What could be better?

Stay tuned for more kitchen treats from the garden!

Adventures at the Theodore Payne Foundation