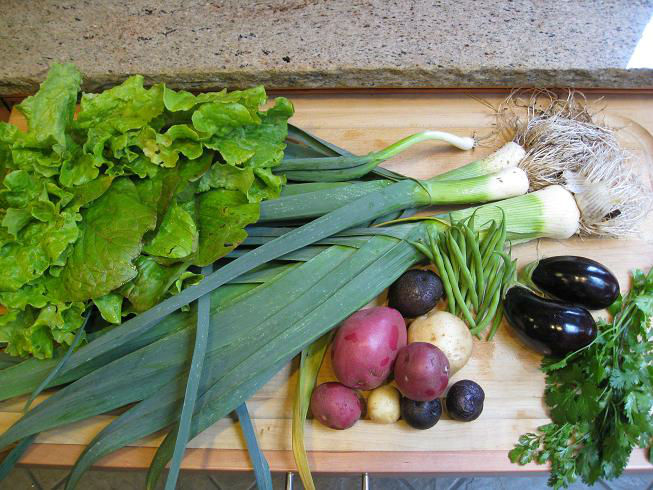 With a tiny bit of rain drizzling down this morning, I harvested a few things from the garden.  It’s very exciting on a number of levels.

The first requires a little story: I didn’t plant eggplant this year – I planted it last year.  It was attacked by flea beetles early on and in fall when the time came to clear the raised bed, I decided to leave the plants because they were showing signs of new growth.  So they overwintered, and when spring came they had grown to a very respectable size.  Then they flowered and set fruit.  Imagine that – a year later!  In the picture below you’ll see the first two shiny dark fruits from those plants. Black Beauty Heirloom Italian eggplants.

Picking the first haricot vert beans of the season always makes me feel like summer is not far behind.  Those little tender beans above are going into a spring stew this evening.

Potatoes: The jewel colored potatoes came from Wood Prairie Farm seed potatoes, and are truly a delight to harvest.  It’s like digging for buried treasure.  The plants are still alive and growing, but they are starting to list over to one side, so I took the liberty of excavating a few out ahead of schedule.  I think that makes them taste better

Leeks: These leeks were another left over from winter.  Along with the green onion in the picture, the leeks keep re-seeding themselves each year, so they are now dotted all over the garden.  I’m seeing a leek and potato soup in my future.

Cilantro and lettuce: It’s sort of a mean trick of nature that it gets too hot here to grow lettuces and cilantro in our California summers.  So harvesting the late spring lettuces and the early plantings of cilantro makes me feel like I’m defeating time, at least for a little while.

There are a few things that didn’t make it into the picture, like our first Bennings Green Tint Patty Pan squash, some zucchini, and some yellow crookneck squash.  It’s clearly time to pull out the cookbooks and start dreaming of savory ways to prepare squash.

What’s your favorite way to cook up squash and other spring veggies?  Share it with us here.