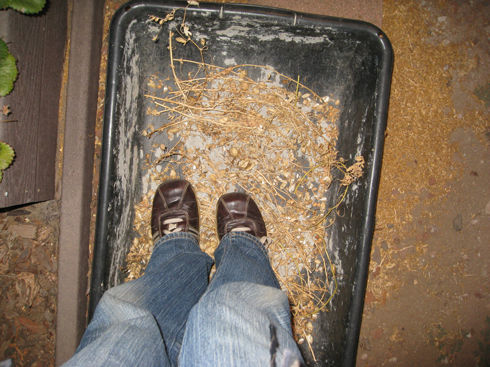 You’ll find them in Indian food, hearty soups, and as a ubiquitous staple of the salad bar at Soup Plantation, but you might not know how good they really are until you’ve cooked them yourself.  Garbanzo beans, also known as chick peas, are usually undercooked when you buy them canned, and certainly don’t hold a lot of flavor on their own (kind of like tofu), but they are a great base for many dishes and very satisfying to grow.

We experimented with growing garbanzo beans in our test garden in spring of 2010.  We only had 8 square feet to dedicate, but that was enough to get a sense of what it’s like to grow this legume. 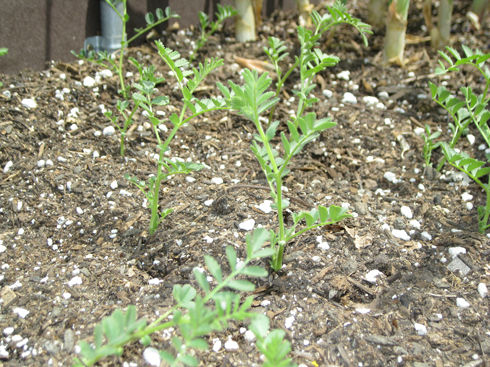 We sprouted the seeds indoors in flats, Grow BioIntensive style, and then transplanted them out to the garden in 8 square feet. As they grew, we noticed that they didn’t look like any other legume we’ve ever grown.  In fact, when touching the leaves, we’d come away with wet hands.  The undersides of the leaves would sweat somehow.  They were constantly moist. 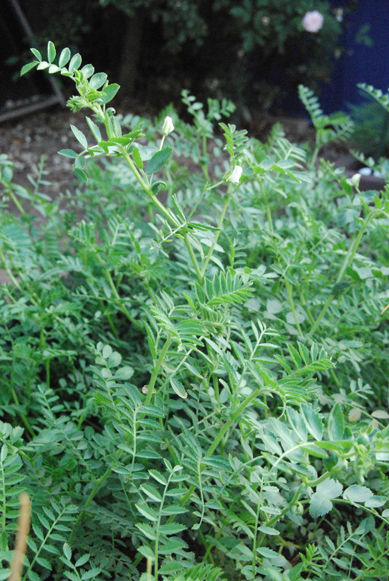 Tiny flowers appeared but it took awhile to notice any pods setting.  They were cleverly masked in the foliage. 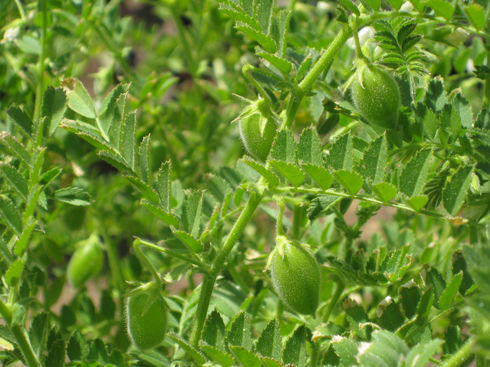 A close up look at garbanzo bean pods forming.

There’s only one bean inside each pod, so you can imagine the amount of work that goes into growing garbanzo beans.  (bow your head to your farmer the next time you sit down to a bowl of channa masala).  We over watered ours a little bit, so some pods never formed beans.

When it came time to harvest, the pods and tendrils had dried out.  The pods rattled a little and were crisp when squeezed. 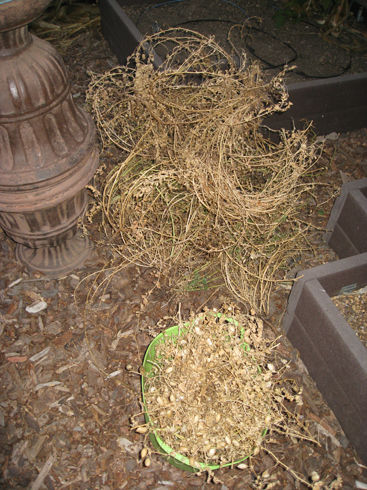 We cut the pods from the tops of each tendril and separated the biomass.

Next came threshing the pods off the stem.  Borrowing an idea I had seen at Ecology Action, we did the shuffle:

Stand on one end of the plant and shuffle over the rest of it with one foot.  The pods crack open and separate from the stem. After the preliminary separating, we had garbanzo beans and some chaff in the bucket, and stems on the side.

Next came winnowing, which can be a little tedious with a weak fan like the one we have.  Use a box fan if you have one, rather than the Vornado (gentle and effective, but not quite strong enough for the job here).  Pour the beans from one bucket to another.  The chaff will blow off and you’ll be left with this: 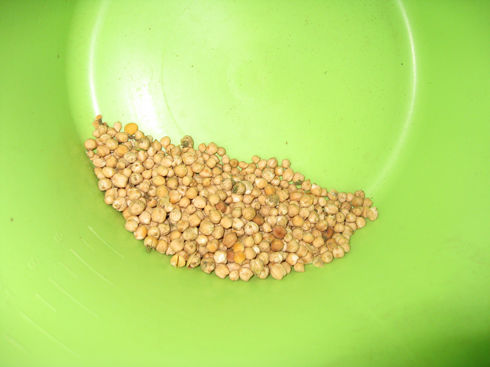 Some green bits from immature vines became embedded in the garbanzo beans.  It will wash off later.

The finished product was about 7 ounces of beans, about 1 1/4 cups from 8 square feet.  Low yield indeed, but totally cool to grow. I think if we had not over watered, the yield would be higher.  If we grew this crop in 100 square feet, we would have yielded 87.5 ounces = almost 5 1/2 pounds, which is a little better than the beginner level yield estimated by Grow BioIntensive.

I’m proud of my cup of beans, and am looking forward to making something delicious with them.

Hey gardenerds, do you grow something that is really satisfying even if it doesn’t yield a whole bunch?  Share it with us here.