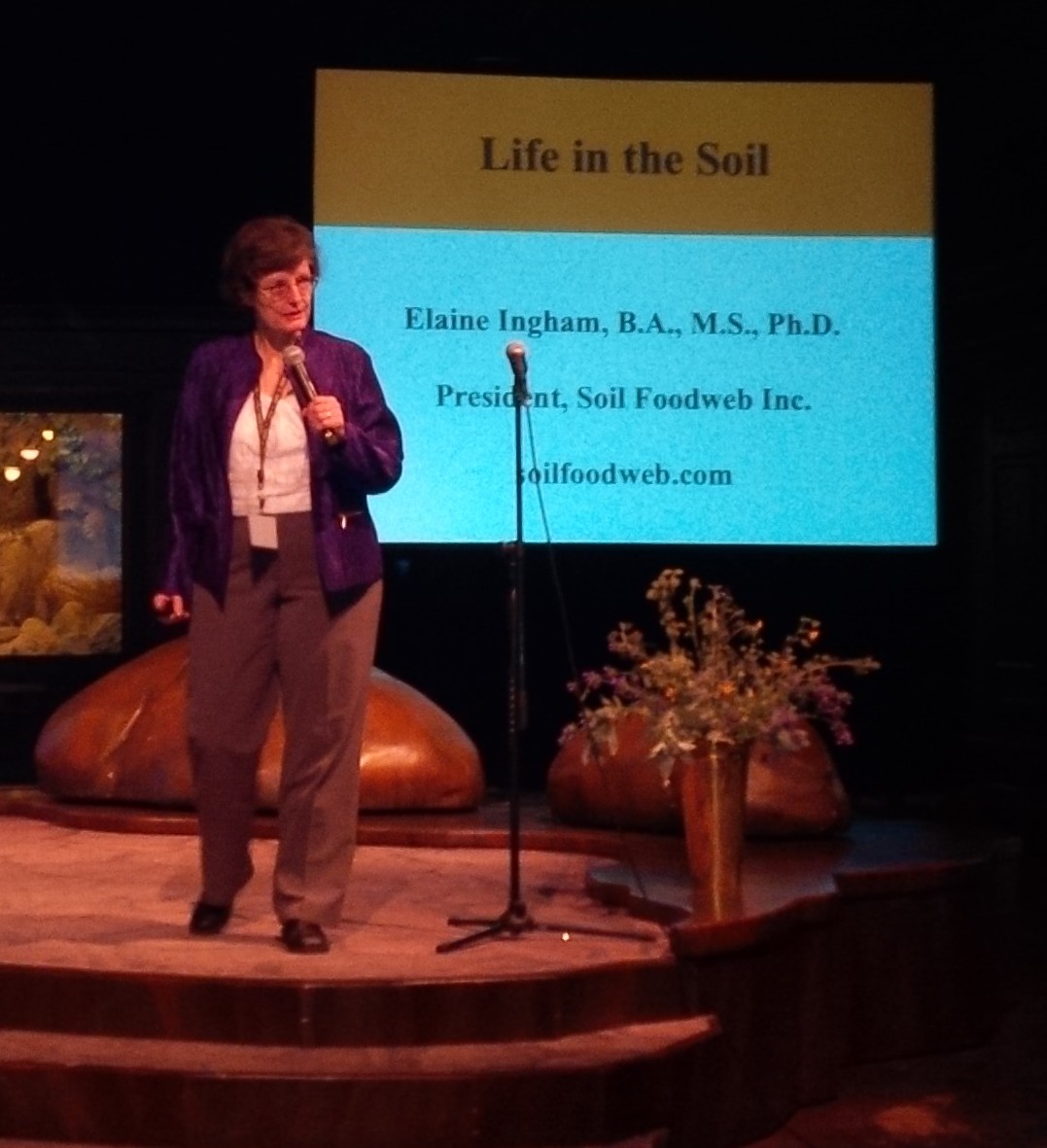 If you’ve ever wanted to know how soil works and what’s going on underground in your garden, a Soil Summit is a great place to start. It is impossible to summarize the whole of the Urban Soil Carbon Water Summit (Soil Summit for short) that I attended last week in one blog post. So I won’t. I can, however, share the highlights from the first part of the first day which featured talks from Dr. Elaine Ingham and Ray Archuleta. So here goes:

The Summit opened with a few words from Andy Lipkis, founder of Tree People (he was 17 when he started that, BTW). He shared a formula.

He shared what Australia is doing to fight extreme temperatures and climate change. They’re planting trees. Studies show that a 40% coverage of tree canopy provides a 9 degree temperature difference. 9 degrees cooler! That’s a big difference. Not to mention the work the trees are doing underground to hold water in place after rain. A mature tree can hold tens of thousands of gallons in its extensive root systems. Even morning dew becomes a water source for drought-stricken areas.

Not only that, Australian officials noticed that with the elevation of temperatures came a dramatic decrease in citizen physical activity, and therefore an increase in health issues overall. The trees in local parks allowed citizens to continue exercising under tree canopy and cooler temperatures. So the takeaway here is: plant climate appropriate trees for our future.

Next up: Ray Archuleta, better known as “Ray the Soil Guy.” Through his work with the National Resource Conservation Service (NRCS), he is driving his “contraption” around the country to show farmers exactly how their soil stacks up against properly managed soils using no-till and sustainable farming techniques.

He started by showing us the contraption, which held undisturbed soil blocks cut out from different fields, including heavily tilled farmland, local Los Angeles soil, low disturbance soil (7 years untilled), soil from a field of sustainably managed Western Wheat, and finally overgrazed pasture lands. Each sample sat side by side in a tray on a slight angle. In front of each sample hung a bucket to collect runoff.

Then he turned on the sprinklers.

Not surprisingly, Los Angeles city soil showed the most runoff (#2 from the left – bone dry soil can’t absorb moisture). The contraption also has buckets hanging underneath the samples (there are drainage holes on the bottom of each tray) to demonstrate water infiltration of soils. In other words, how much water your soil actually absorbs. The sustainably managed Western Wheat sample showed the most infiltration (least amount of water in the bucket).

“This brings farmers to their knees,” Ray said as he flipped the soil samples upside down onto a tarp so we could see which were still dry on the bottom and which were soaked through. There was one more demonstration he shared that brought us to our knees:

On the left, a clump of soil from a regularly tilled field. On the right, soil from a no-till field. The tilled clump is falling apart while the no-till sample holds together for the entire presentation. The water is crystal clear. See, tilling creates activity that destroys soil structure. In the process, microbes need food, so they eat up the biotic glues that hold soil together, leaving nothing for particles to cling to.

Ray’s demonstration opens up the conversation for farmers to learn how to change practices. He said that when farmers make these changes, they lose less soil to erosion and they start using 50% less water in their fields. The takeaway here: don’t till your soil.

She shared how her team transformed the Bush Library landscape from what was essentially a parking lot (big rigs had been parked on it, compacting it for years) into a thriving native prairie in one year. I want to know more of the gritty details, but let me say this: two companies before her tried and failed, because they couldn’t excavate the soil. Too solid.

Elaine came in and tested the soil for what was missing. Not for NPK, pH and trace minerals, but for soil microbes. From the results of the soil microbe tests, she calculated what the soil needed. Her team spread fungal-dominant compost over the surface, sprayed it with fungal-dominant compost tea and planted native seeds, plants and trees. They also created water catchment areas throughout. She emphasized that all this was done without irrigation…in Texas.

I was too in awe to snap photos of her slide show. From basically flat asphalt to lush prairie in one year, over winter. Amazing! The takeaway from this: check your soil microbiology regularly and give it what it needs. You probably won’t need anything else.

Read more about the Soil Summit in Part 2.

The Gardens of France – Part 1- Tarascon