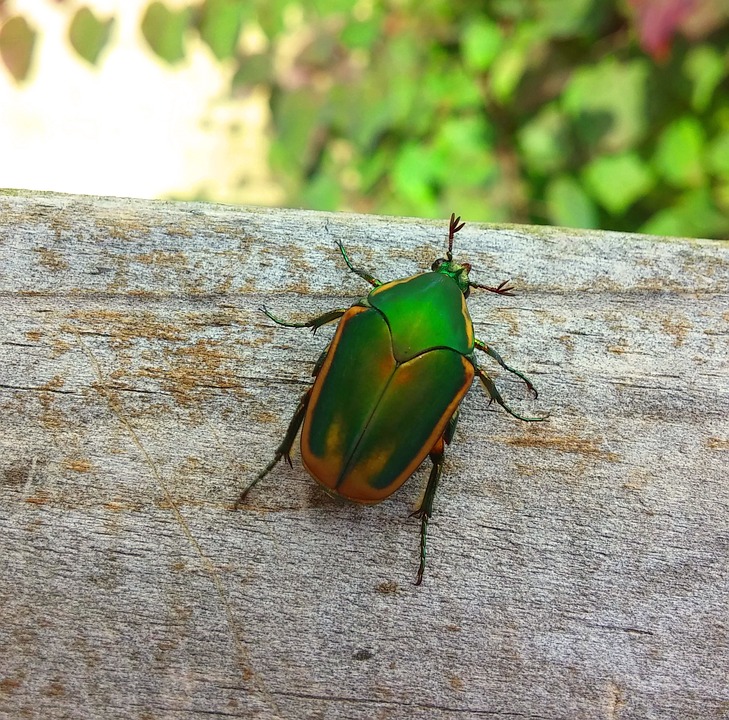 Fig Beetles are green and iridescent. They lay eggs in garden soils, compost bins and lawns.

A question came into Ask Gardenerd over the holidays: “How do I discourage the raccoons digging in my raised veggie beds?? They don’t dig on the hillside, where their efforts would be appreciated! 🙂 So far vinegar; cayenne pepper hasn’t worked! I know they are looking for grubs. I read that BT will kill the grubs, but not sure that I want to do that since (I think) the grubs may be beneficial for the soil.– Cynthia”

You’re right, those raccoons are looking for grubs. Depending on where you live, the grubs can be the larvae of Fig Beetles (in the Southwest and Mexico) or Japanese Green Beetles (in other parts of North America, but mostly east of the Mississippi). They aren’t beneficial to the garden except as an aerator. It was long believed that treatment (namely inoculating lawns with Milky Spore–a misnomer of Milky Disease) is location dependent, because often what works on Japanese Beetles doesn’t work on Fig Beetles, but this article explains that misconception. According to the Los Angeles Natural History Museum, Fig Beetles aren’t harmful at all, and they do help decompose fallen fruit. Let’s look at both insects:

The larvae of both insects look very similar: white with translucent skin and creepy-looking legs near its mouth parts. They are usually curled into a crescent shape when you find them.

You can put up a physical barrier to prevent raccoons from entering your garden (loosely hung deer fencing makes raccoons unable to climb over it), but it’s best to attack the problem at its source.

Since our recommendations here at Gardenerd almost always center around feeding the Soil Food Web, it comes as no surprise that the answer once again falls into that category.

There are bad nematodes (root-feeding types) and good nematodes (predator-feeding types). More than 400 different nematodes can exist in garden soils, lawns, and compost piles. Luckily, we can target a problem by inoculating soils with a specific species of nematodes.

Grub-eating nematodes are available from several sources including Gardens Alive and Arbico Organics. The more specific you can get, the better your chances of out-competing the grubs. You may need to apply several times per year, in order to catch them while they are feeding, but it’s worth being diligent.

If your beds are not covered in plants right now, dig out as many grubs as you can and leave them in a bucket overnight (they can’t climb out) for raccoons to take. Crows will eat them as well. We feed ours to our chickens as a snack. A friend calls them “chicken shrimp”.

We hope this helps you in your garden this season, Cynthia. Thanks for writing in.

A Shift in Perspective: Pachamama Alliance

My, What Trellises You Have

How To Garden While Injured