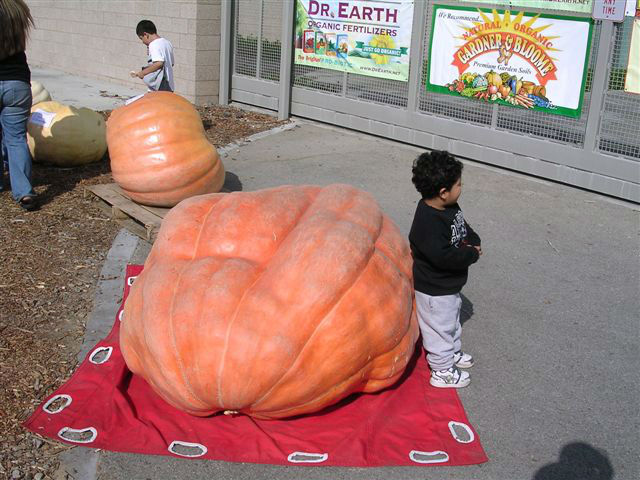 For those who don’t know, Gardenerd.com has partnered with School Nutrition Plus and the Woolly Pocket Company to install Woolly Pocket wall vegetable gardens in schools throughout Los Angeles and Arizona.  We were fortunate to get Kellogg Gardens as a sponsor to donate organic soil amendments for the school garden projects.  Each year, Kellogg also hosts Pumpkinmania – a giant pumpkin weigh-off with cash prizes for the largest pumpkin and other categories.  This year, I was invited to attend Pumpkinmania 2009 by Ty Hall of Kellogg Gardens.  How could I resist?

Emily Burson of School Nutrition Plus and I drove down to Santa Ana for the festival which was held at the Heritage Museum of Orange County.  We arrived early enough to see the pumpkins being driven in by their growers.

Some had do be lifted out by forklift, others were carried by Pumpkinistas (that’s Ty with the camera bag):

We needed a close up of those fantastic hard-hats, so Ty and Stuart graciously posed for us:

Large and small, they arrived from all over to bring their pumpkins to the Weigh-off.  We met a few young growers who were very proud of their pumpkins modeling the fabulous Pumpkinmania logo for this year:

While the pumpkins continued to arrive, we took a walk over to the Heritage Museum’s garden that Kellogg has sponsored.  It was bustling with volunteers harvesting summer crops and planting fall seedlings. In the background behind the fence you can see rows of vintage farm equipment on display.

The cute factor requires too many pictures to describe it, but when we got to the back of the garden, we saw this and thought it summed up the place very nicely.

We weren’t able to stay long enough to see the winner announced, but we got some great photos from Ty that tell all:

Oooh – the competition is close…

To see all the winners, visit The Pumpkinmania Blog for more details.

Have your grown a giant pumpkin before?  If so, how much did it weigh and what was your secret?

Trials and Tribulations of Making Yogurt