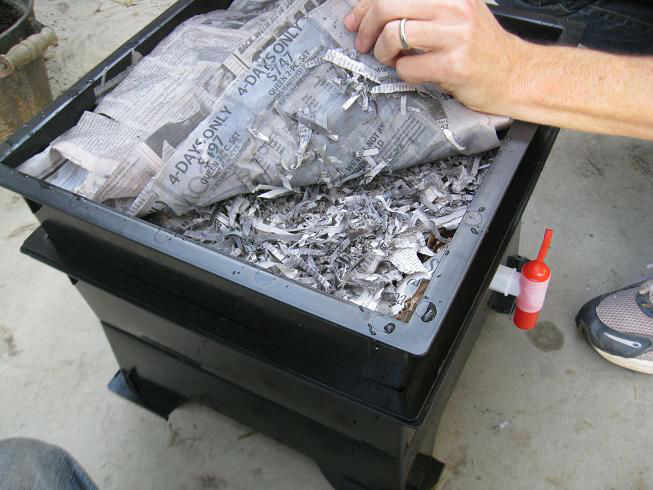 Santa was very good to me this year.  I got the Worm Factory that I wished for, and we couldn’t wait to move our worms to their new home.  My husband and I carefully read through the instructions that were included with the Factory and found it very informative – above and beyond the usual information that you might see in a vermiculture pamphlet.

We assembled the unit, and then moved on to the task of preparing the bedding for the worms’ new home.  The unexpected discovery was that the folks who put together this worm factory had their very own ideas about how bedding should be prepared for the worms.  It was a slightly more advanced preparation than what I was accustomed to seeing.

First, layer 3 to 4 sheets of dry newspaper on the bottom of the first tray. 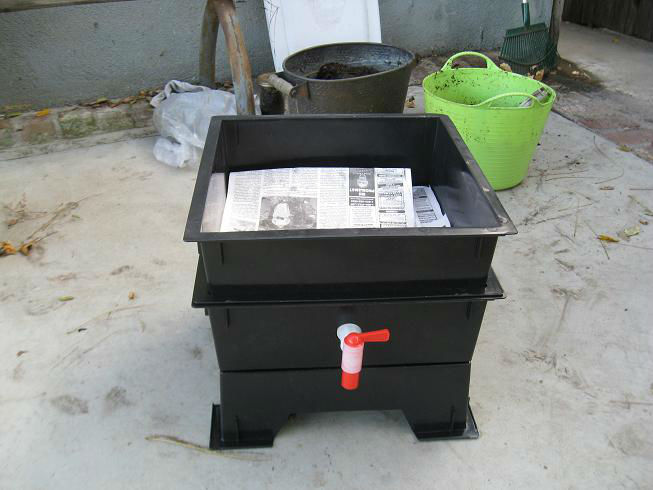 Next, soak the coir (shredded coconut hull fibers) and add in a little of your existing soil or compost.  Then add the package of shredded mixed paper that came with the unit (they thought of everything) to the moist coir/compost blend. 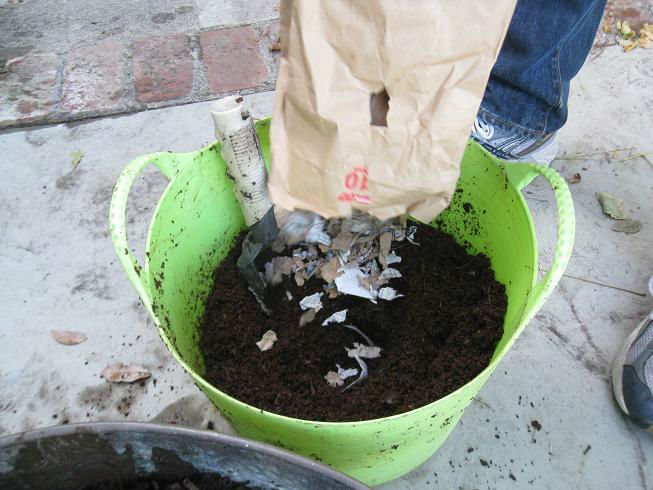 Then we added the mixture to the top tray over the dry newspaper sheets. 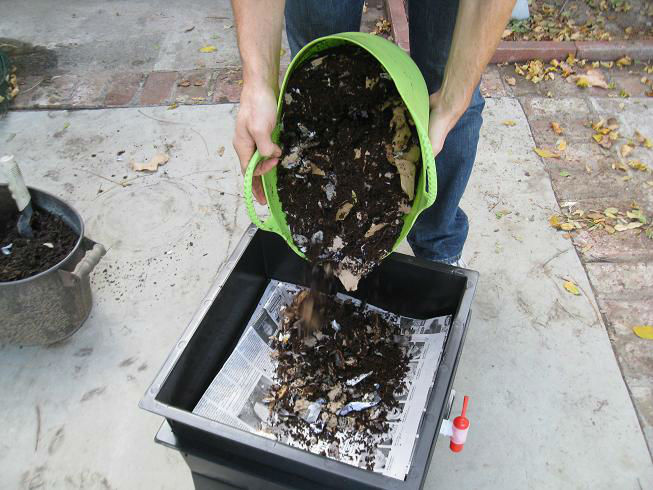 At this point, you dig into the corner of your newly added bedding and dump a couple handfuls of food scraps.  We used some sadly soft apples that never made it to the juicer.  The final step in bed preparation is to add a two-inch layer of dry shredded newspaper and then top the whole thing with another 3 or 4 full sheets of wet newspaper.

The bed was made for our worms.  Now we had to transfer them from their old dorm room to their new high rise.  They refused to be photographed, but here’s how it went:

We dumped the Rubbermaid bin over onto a tarp and separated the mass of castings, scraps and worms into little piles. The worms immediately dove down for cover from light (it helps that we were both wearing headlamps, as darkness had fallen by the time we could get to the worm part).  We pulled off the tops of each pile and added those worm-free castings to the compost bin to help boost our compost this spring.

Eventually the worms were isolated from their previously shed castings and we scooped them up en masse and dumped them into the first tray, under the wet whole sheets of newspaper.  The newspaper was replaced on top, followed by the black lid to ensure sunlight would not enter the Factory.  Voilà! And we didn’t even have to hire movers.

In about 2 weeks, we’ll add more kitchen scraps for them and in a month or two, we’ll start a new tray that will stack on top of the first tray.  The worms will migrate upward to reach fresh food and they will leave behind the castings in the bottom tray, which we will happily harvest to feed the plants.

Chickens: When Betty is a Billy