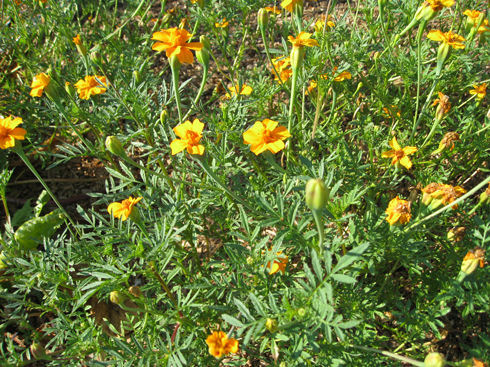 A great question came into Ask Gardenerd this week:

“Do you have any tips on getting rid of root rot nematodes? Thanks! – Max“

There are natural ways to rid or drastically reduce your soil of pesky nematodes, Max. But first a clarifying question: when you say “root rot nematodes” did you mean “root knot nematodes?” Root rot is usually caused by something else, like a fungus or by critters like beetle grubs eating the roots. Root knot, on the other hand, is the condition when the root systems of your plants develop galls all over them. Galls are enlarged, warty-looking knots on your roots that have actually become a home for root knot nematodes. Those galls (and those nematodes) block the uptake of nutrients, so plants become stunted or die.

We’ve written about nematodes before, and even done a podcast about them (find the link in said blog post), so there are some resources you can utilize to research a solution. In our own garden, we had trouble with nematodes stunting our tomato plants. We didn’t use the shrimp shell meal that was mentioned in the podcast, we just grew nematicidal marigolds and it helped for awhile. They seem to be back now, so it’s time to grow them again.

One gardener out there used a combination of shrimp shell meal, beneficial nematodes and nematicidal marigolds to conquer the problem. Seems to have worked for him. Here is what UC Davis has to say about pest management:

“Certain marigolds, Tagetes species, suppress root knot and lesion nematodes. French marigolds (varieties include Nemagold, Petite Blanc, Queen Sophia, and Tangerine) are most effective. Avoid signet marigolds, T. signata or tenuifolia, because nematodes will feed and reproduce on these. Marigolds don’t work well against the northern root knot nematode, Meloidogyne hapla, a species common in areas with cool winters. The effect of marigolds is greatest when you grow them as a solid planting for an entire season. When grown along with annual vegetables or beneath trees or vines (intercropping), nematode control usually isn’t very good. To prevent marigold seed from getting in the soil, cut or mow the plants before the flowers open. As with other cultural control methods, nematode populations rapidly will increase as soon as you grow susceptible crops again.”

There are some predatory nematode products on the market that inoculate your soil with the kind of nematodes that eat the bad ones. University data seems to show these as being ineffective (or at least they state that research showing that it works isn’t currently available) . That said, ACT or Active Compost Tea is a great addition to your soil for any microorganism issue. Compost tea that has been brewed with a food source and aerated for 24-48 hours is chock full of beneficial microbes that destroy pests.

UC IPM recommends solarizing your soil to heat-kill those bad microbes. We’re not big fans of drying out the soil and baking it (kills beneficials as well as pests), but in a pinch, it’s effective (on one forum, we found a gardener who puts down cardboard on the affected area, sets it on fire to heat-kill. He stands by with a hose just in case.) UC IPM also recommend letting your soil go fallow for a season or two to starve pests out.

The final suggestion is to grow resistant varieties. This document shares some cultivars that are proven resistant to nematodes. They aren’t heirlooms or open pollinated varieties, but it’s a step you can take on a temporary basis as you use other methods to get rid of the nematodes.

We hope you find this info helpful, Max. Gardenerds, weigh in if you have other suggestions that have worked for you.