Okay, this isn’t so much a garden as it is a farm, but the idea is the same – broad spectrum appreciation for what the earth can give us through growing plants.

I leafed through the guidebook to find the page highlighting a tour of lavender fields.  We only had half a day, after having spent the morning in Tarascon at the farmer’s market, where we bought some cheese, bread and tomatoes for lunch later on.  We headed onward to Aix-en-Provence.  We stopped in Aix for lunch; a peasant’s lunch on a stone bench.  We ate our bread, cheese and tomatoes over the sidewalk, with tomatoes dripping all over our hands.  It was wonderful.  Eventually, we made our way to the nearest stop of the guidebook’s suggested tour – Valensole.

A little town in the hills, much warmer than the coastal part of Southern France, Valensole boasts of purple fields, family farms and quaint tourist stops.  The guidebook advised us to roll down the windows upon approach, so we did.  The air did not disappoint.  The second we cracked the windows, the soft fragrance of lavender came wafting into the car.  It was one giant spa for the senses.  First the scent, then the visual image of row upon row of lavender mounds dancing in the breeze. 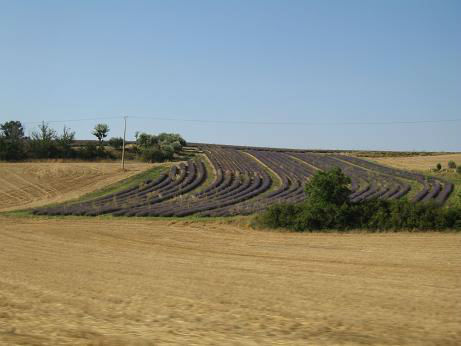 The shop was bustling with tourists, buying their oils and sachets and soaps.  Lavender bundles and baskets filled with “bath crap” as I call it (all the good things a person who loves baths would need) were on display in the corners of the store.  Outside were copious fields of swaying lavender.  We went out to take some pictures. 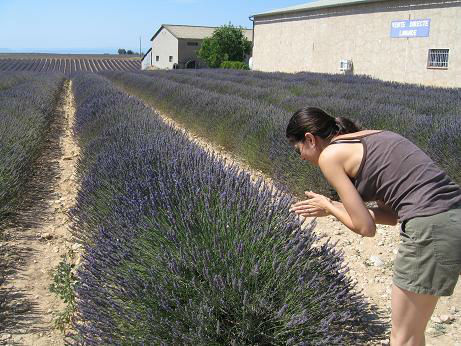 Even though it looks like I’m bowing to the lavender, I am really rubbing the flower buds between my hands for a sniff.  The scent was glorious.  I wanted to lay down in the field, but the ground was very rocky and dry.  This fact seemed to reinforce my belief that the most successful way to grow lavender is to ignore it.

We drove further into town and parked along a line of shops, each one selling some kind of lavender scented something.  We wandered into a store where shelves were stocked with wines and honey and of course, lavender oil.  The woman behind the counter encouraged us to try all the different honey available from the regions.  We nearly sickened ourselves trying all the different kinds.  It’s amazing how completely unique some honey tastes – like nothing I’ve ever tasted here.

It was at this store that I got my education about the difference between Lavender and Lavendin.  I wrote about it in a recent newsletter: Summer Newsletter.  She tried in her best broken English and the rest in French (which my husband either translated or I got the gist of it) to tell me which oil is used for what purpose.  She gave me an information sheet to take home with me, so I picked out a small bottle of lavender oil (my preference over Lavendin) and bought it.  What a delightful learning experience that was.

The great thing about driving to Valensole is that you have to leave on the same road from which you came, so the view on the way out was just as spectacular as on the drive in. 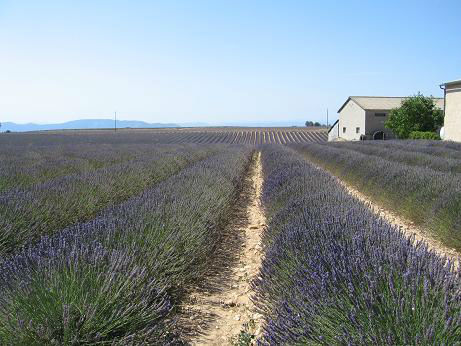 Do The Math for Climate Change