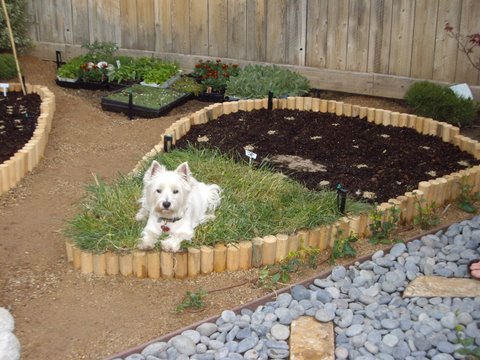 This spring, Gardenerd has helped many new gardeners get on their way.  Whether it be through classes, consulting or food garden design, it’s been a delight to watch people get bitten by the gardening bug and begin growing their own food.

One such delight came last month, when we finished installing a new garden in Sierra Madre.  At first it was going to be a simple, straight forward garden with a few raised beds to maximize growing space.  But as the process went on, the home owners realized that they really wanted to incorporate their dream garden – a lush Japanese garden with a water feature and meandering path.  They sent me a few pictures and I re-swizzled the design to encompass the idea.  And then installation began.

This is what it looked like before.  The home owners wanted to remove the grass, and grow as much food as possible, while still allowing a little space for their absolutely adorable dogs to roam and rest.  The pile of rocks in the corner presented an opportunity to incorporate the boulders and stones into the new landscape.

We went shopping together for some pots that would serve as a focal point and also as a home for the herb garden in the center.  We also talked about adding citrus trees to the deck and on either side of the garage (not shown).  As the project continued, the grass was removed and the design was mapped out in the soil. 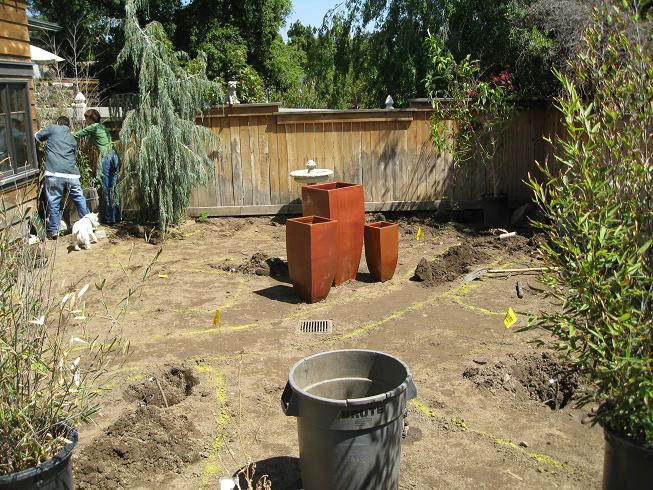 You can see one of the cute dogs in the background, curiously looking around and wondering what happened to all her grass.  We created raised beds using the stones from the pile, and edging that we fabricated to look like the borders used in many Japanese gardens.  The beds and pathway had a free-form feeling that flowed and yet allowed access to all the beds.

We added our super soil mix, after planning out all the irrigation, and then planted all the seeds and plants.  We used bamboo trellises (an obvious choice) for the tomatoes and cucumbers and placed drought tolerant plants along the river rock pathway to soften the lines a bit.  Finishing off with decomposed granite, the Japanese vegetable garden came to life.  In the end the home owners were thrilled with their new back yard and look forward to harvesting the bounty of their garden.  They dubbed the garden, “A River Runs Through It”. 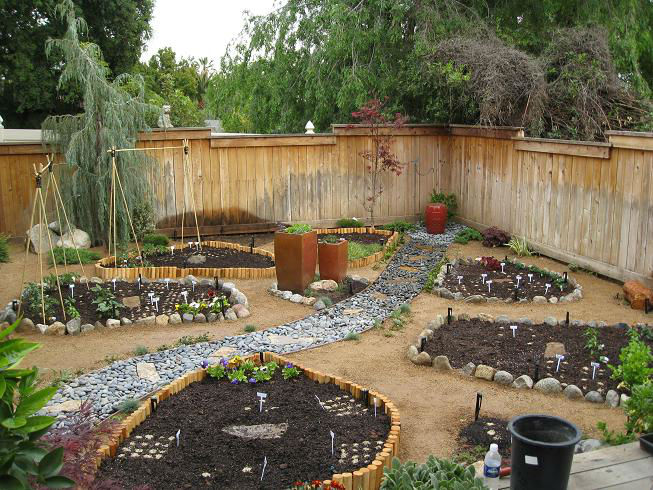 As a footnote, Helen – one of the adorable dogs, was rewarded for good behavior with a patch of grass in one of the raised beds.  A few days after completion, the home owner sent me a picture of Helen enjoying her grass patch.