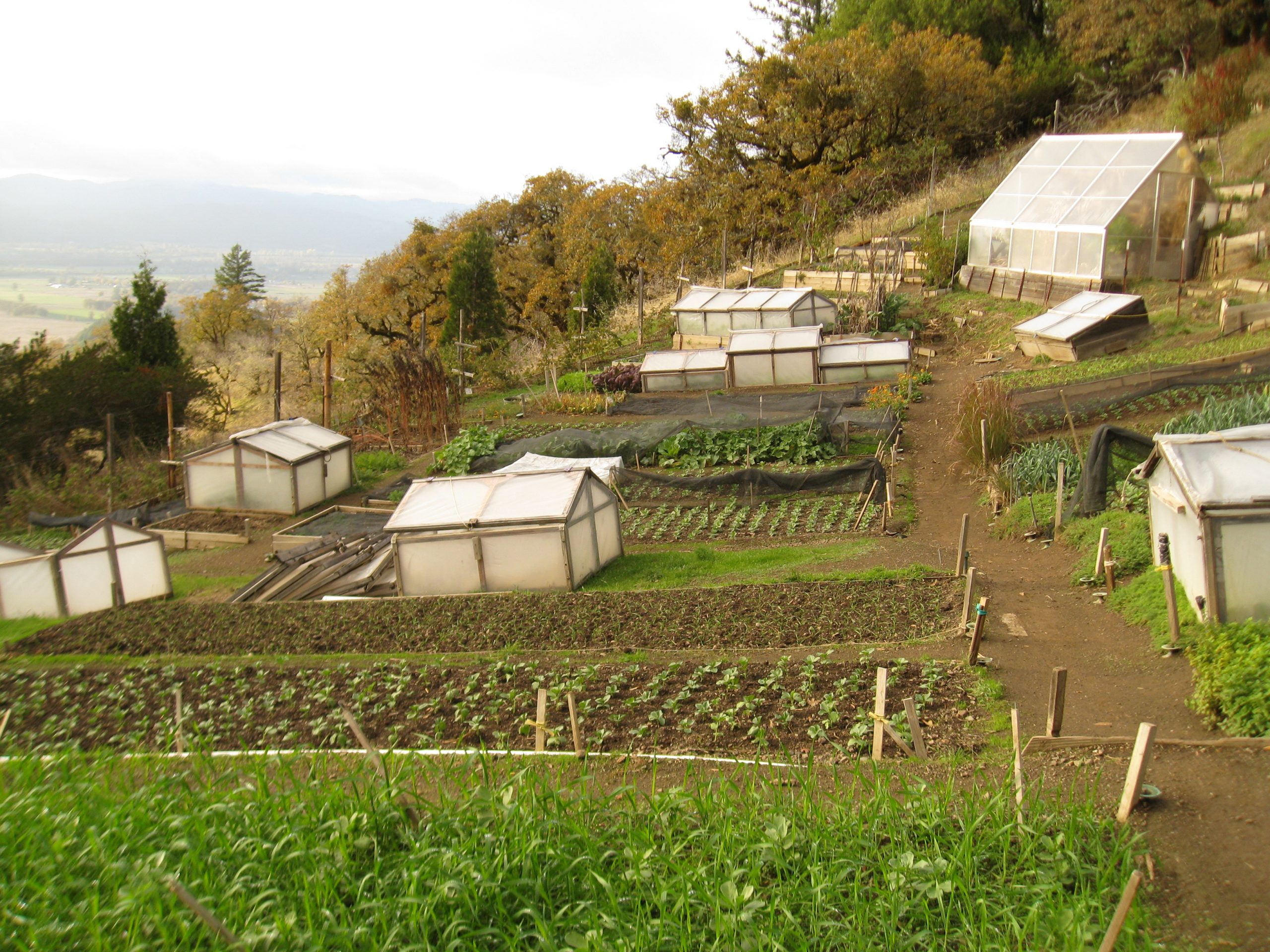 It’s been busy here, launching the new website and 2 new products for the holiday season, so blogging has taken a back seat until now.  These blog entries are really my favorite things to do (besides harvesting succulent veggies while laughing in the face of commercial agriculture), and writing them gives me an excuse to venture out to new territory.

So we continue with the Grow BioIntensive workshop that I attended in the beginning of November.  On our first day of the workshop we visited the Ecology Action Farm, where we took a tour of the gardens, compost heaps, seeding tables, and the legal “humanure” composting toilet on site.  Several interns showed us around, explaining how the cold frames extend the harvest, demonstrating how to build a Grow BioIntensive compost pile and showing the process from starting seeds in flats to planting them out in the garden. 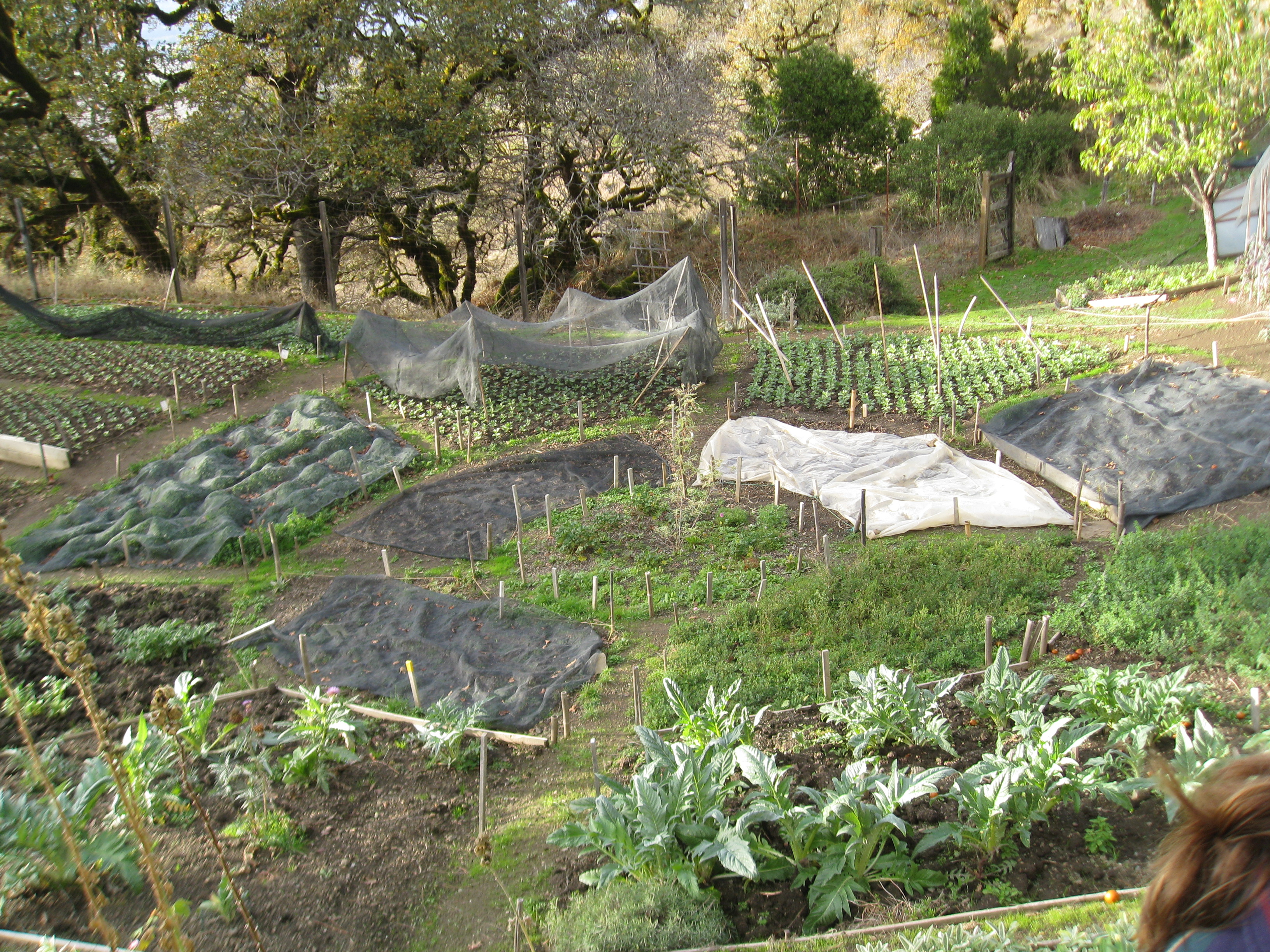 They showed us their compost crops in action – alfalfa beds that have been producing for 15 years.  We saw 6-feet-tall tree collards that are on a 4 year rotation.  Despite the fact that the farm looked healthy and prolific, they told us that the land is high in nickel, so they have trouble getting higher yields there compared to their other test garden in the different location (more on that in the near future). 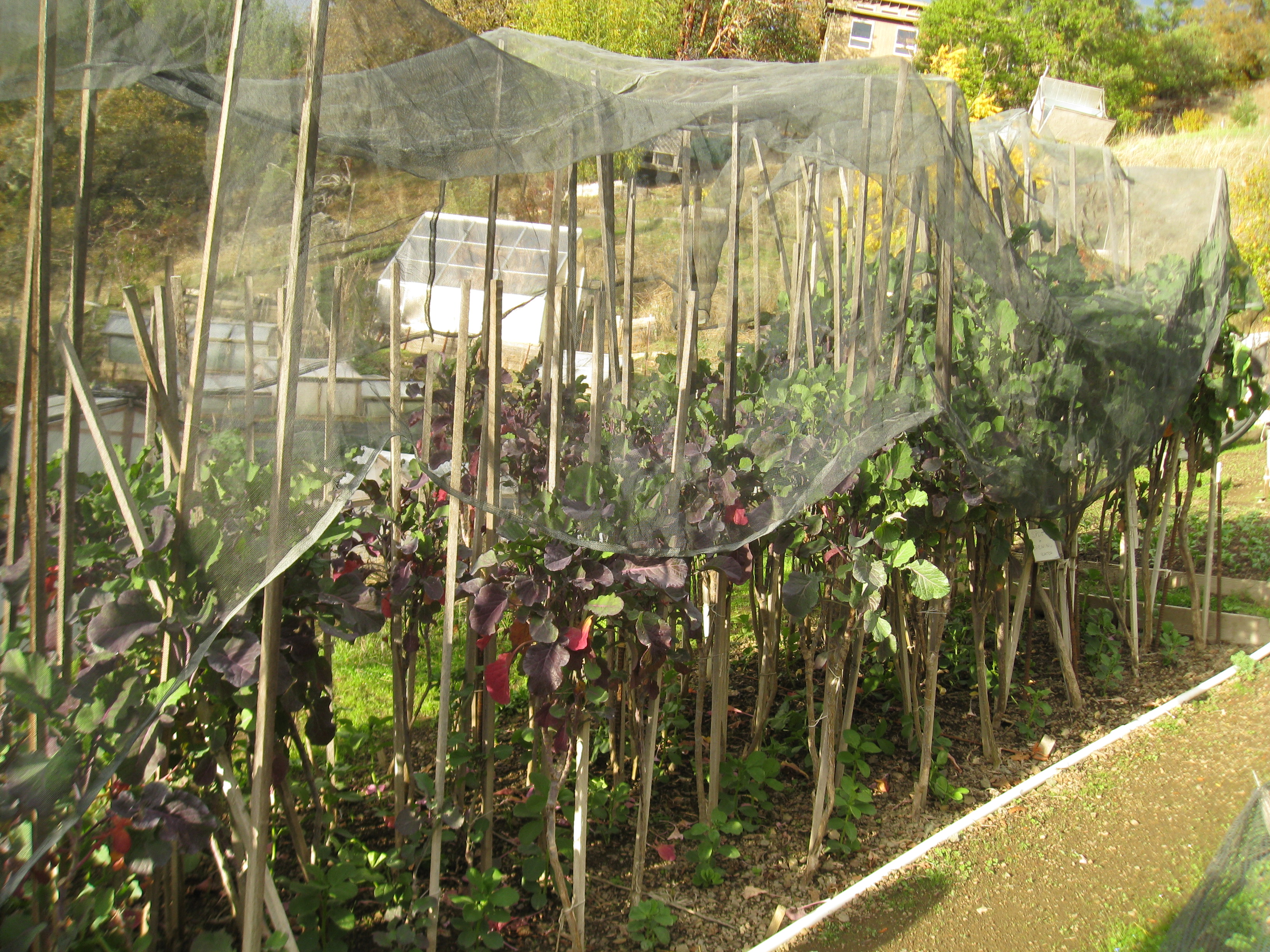 Tree collards on a 4-year rotation, interplanted with fava beans.  The tall collards in the back will be pulled this year, and the young plants in the front and in their first year.

They had a shower on site with a solar water heater, and a greenhouse with plenty of cold frames still nursing tomatoes along. 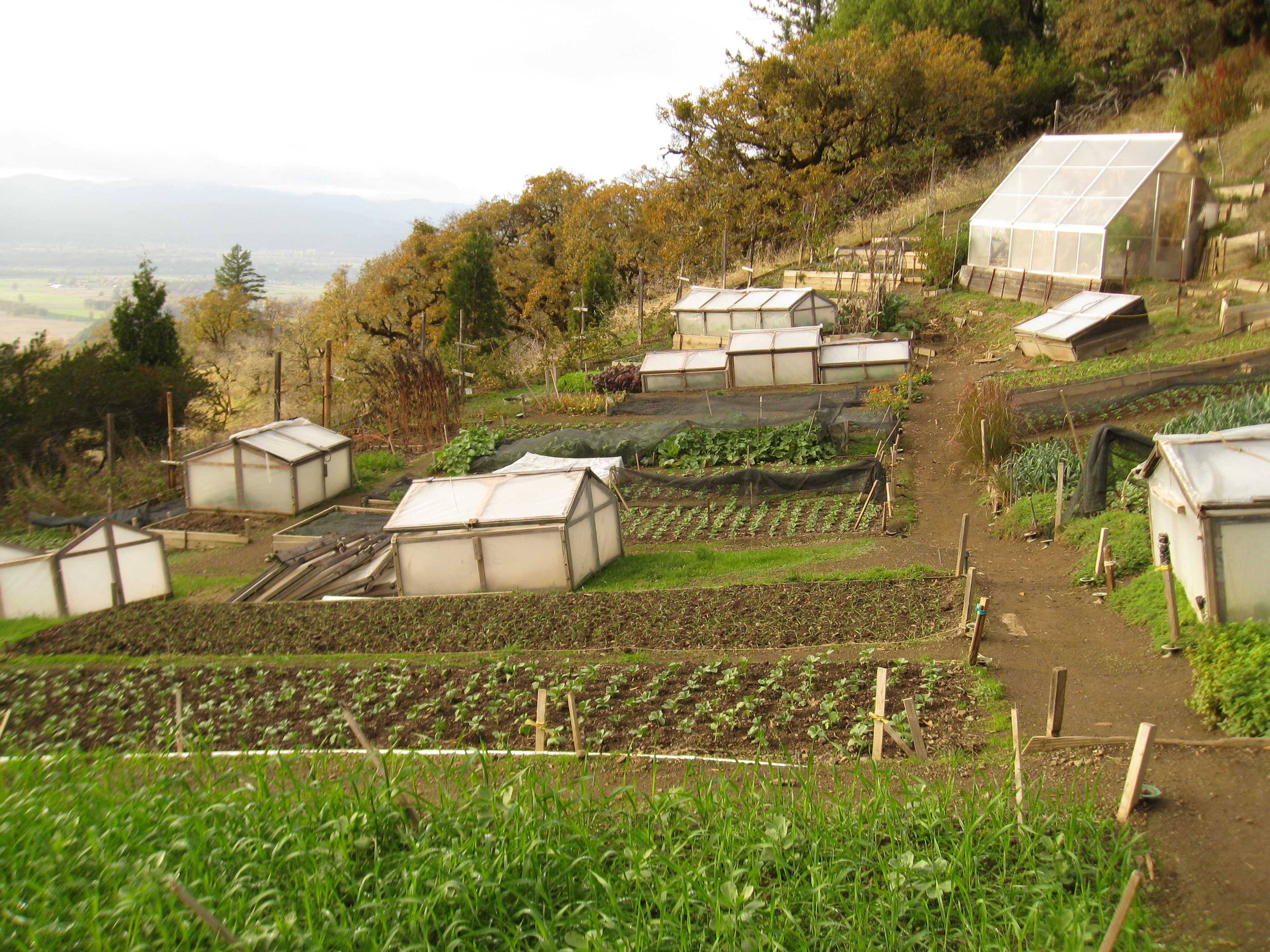 Each bed is 100 square feet.  Most are growing cover and compost crops for winter.

Perhaps the cutest part of the garden was what they called the Medicine Cabinet – the medicinal herb garden near the Circle: 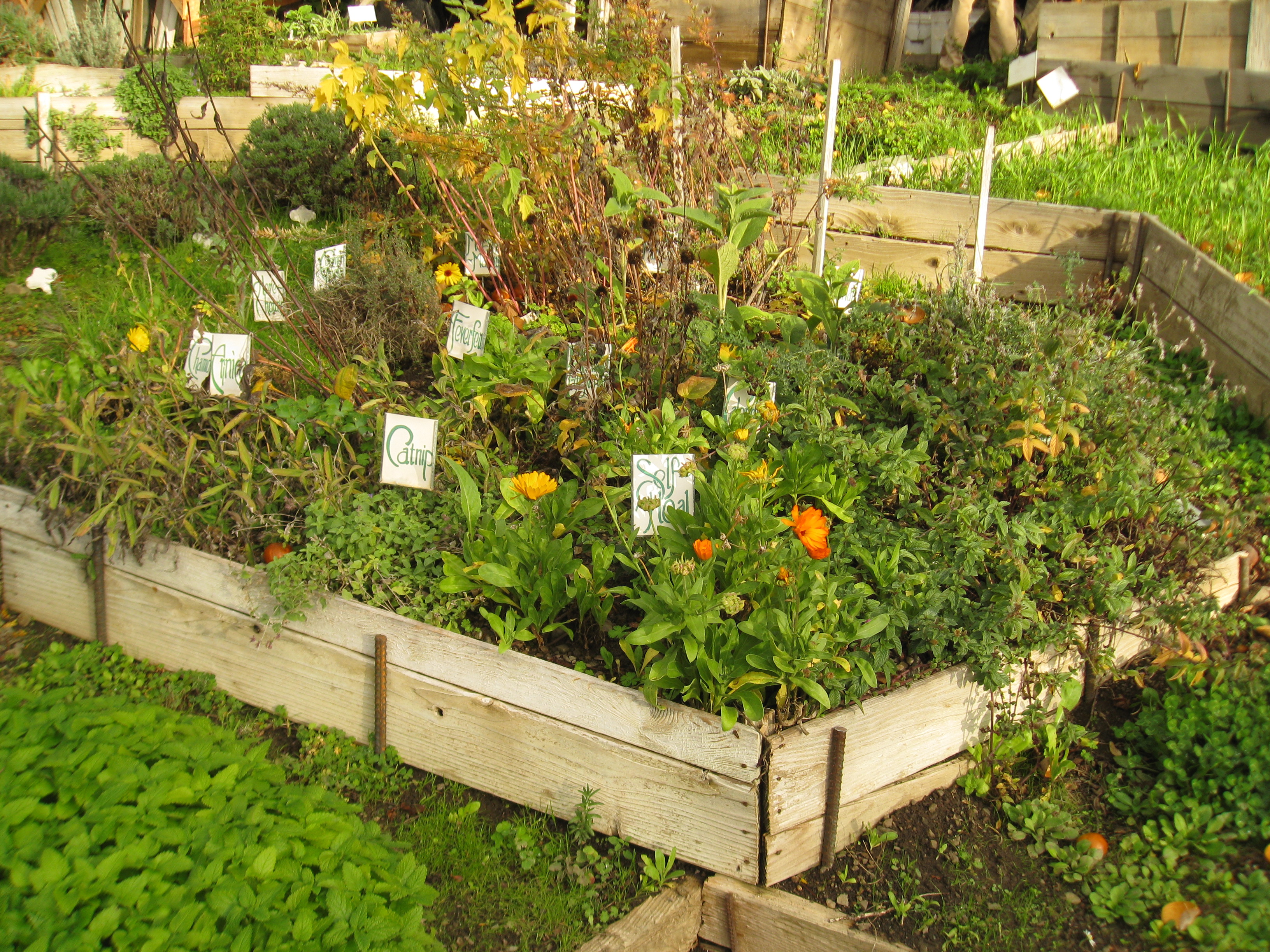 50 square feet were dedicated to growing healing and culinary herbs.

It was tempting to pick a leaf here and there to sample the tasty greens on the property, but we were asked to refrain from doing that, as they weigh and measure every single piece of fruit, every pound of grain, and every gram of bio-mass that is generated from the garden.  One of the interns who is leaving at the end of the year said she looks forward to eating food right in the garden without weighing it first.

Visiting the Ecology Action farm gave us a perspective of what can be accomplished on less than 1/4 acre of land.  It also provided a much needed breather from all the information we were taking in during the workshop.  We huddled together as the sun set and warmed ourselves with ideas of growing a bountiful garden when we get home.