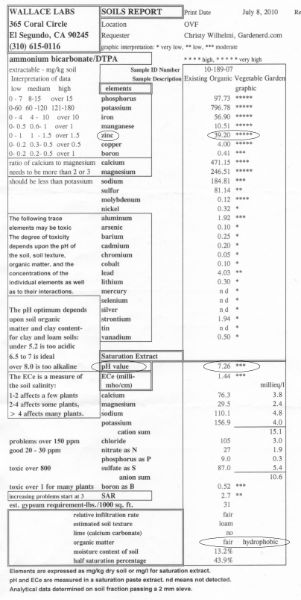 What’s a girl to do when her plants look anemic and aren’t growing like they should be, despite the mounds of compost and organic fertilizer that are lovingly applied each season?  The mystery can only be solved one way: Get a soil test.

We have two sets of tomatoes – one in our test garden, and one at our community garden at Ocean View Farms.  Both were grown from seed under grow lights, and both were transplanted within a couple of weeks of each other.  By July, the OVF tomatoes hadn’t reached the top of the cage, whereas the tomatoes at the test garden were already hanging over the tops of the cages.

So we took a sample – from 6 inches deep (for the Standard Agricultural Soil Suitability Analysis Test) from 10 locations throughout the garden and sent it off to Wallace Laboratories in El Segundo, CA, along with a check for $75 – a small price to pay for clarity.  The results came back within a week with startling news.

Our soil is chock-full of nutrients.  It’s also chock-full of zinc which is not only toxic, but prevents plants from taking up the nitrogen, phosphorus and potassium they need to grow big and strong.  Here’s what a soil test looks like:

Looking over any soil test might make your eyes cross, so it’s a good thing that the test comes with a letter describing the results of the test and suggested amendments for fixing the problems. As you can see above, not only is our soil nutrient rich, but it is “hydrophobic” – or afraid of water.  What it really means is that it is very difficult to wet the soil.  It’s true – water basically beads up on the soil at Ocean View Farms.  I’m so grateful to finally have a word for that phenomenon that’s been driving me crazy all these years.

The report told us that the optimal level for zinc is only several parts per million.  We have 39 ppm.  In order to decrease the toxicity and to help aid in absorbing water (and lower the salinity as well), the report suggested that we add gypsum to the soil at 31 pounds per 1,000 square feet.  That works out to about 3 1/2 pounds for my entire plot, since it’s less than 100 square feet.  Our pH is a little higher
than I would like, but the fella at Wallace Labs suggested that raising
the pH even more toward alkaline would help drive out the zinc as well.

The folks at Wallace Laboratories were kind enough to call me back to answer my questions about where the heck all this zinc came from.  They told me that zinc is everywhere. It comes off our tires when we drive; it comes from airplanes (we’re under the flight path of the Santa Monica Airport); it comes from anything that is galvanized (including compost screens and watering buckets).  Zinc levels are high at the bottom of the ocean, so any kelp or fish product is going to be high in zinc.

Once again – being at the top of the food chain has its challenges.

Needless to say, getting a soil test is like finally driving with your eyes open.  I can’t recommend it enough for new gardeners and for those who are having trouble growing in an existing space. Stay tuned for updates as the gypsum remedy takes effect.

Gardenerd appears on Nature in Us Blog