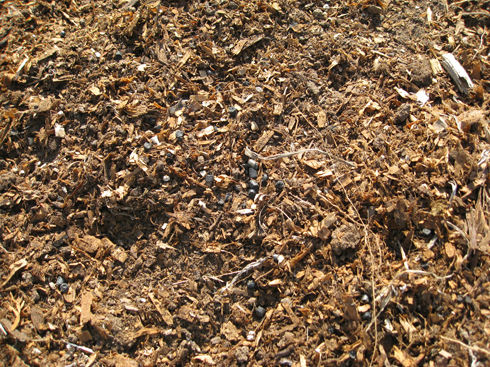 Ever heard of biochar?  Maybe the term “Terra preta” rings a bell?  Back in 2008 National Geographic published an article about a discovery of man-made nutrient-rich soil in the Amazon.  Yes, man-made.  It appears that by layering soil, charcoal, pottery sherds (yes, that’s the correct spelling), and plant and animal wastes, the soil was transformed from nutrient-poor, desolate soil into the fertile ground that grew sustenance for ancient jungle inhabitants.  I remember reading about it and thinking, “Hey, this could save the planet…”

Today, biochar is making a comeback.  According to Wikipedia:

“Biochar or Terra preta is charcoal created by pyrolysis of biomass. Biochar’s primary uses are carbon sequestration or Bio-energy with carbon capture and storage, although it can improve water quality, increase soil fertility, raise agricultural productivity and reduce pressure on old-growth forests. Biochar is a stable solid, rich in carbon, and can be used to lock carbon in the soil. Biochar thus has the potential to help mitigate climate change, via carbon sequestration.” 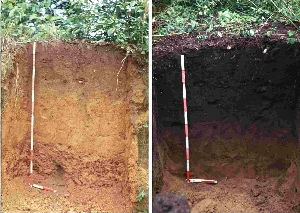 Rainforest soil on the left, transformed into fertile
Terra preta on the right

Biochar first caught my eye as a practical application when I met Michael Whittman of Blue Sky Biochar at the Go Green Expo earlier this year.  He explained to me that biochar not only captures carbon, but it helps improve soil’s ability to hold moisture. My ears perked up.

As Gardenerd readers may remember, I have hydrophobic soil in my community garden plot.  Water beads up on the surface and the soil is very difficult to wet.  What if biochar could help with this problem in our drought-stricken Southern California?

Michael gave me a bag of Biochar to test out in my garden.  This week I tilled it into the soil as he instructed: 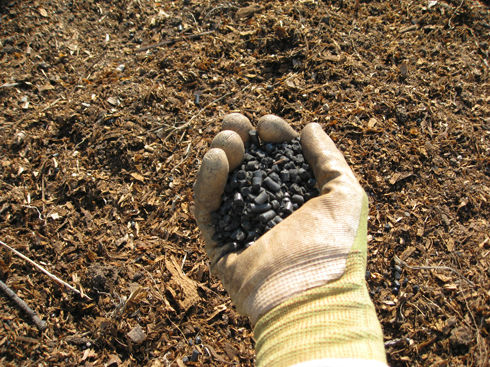 Distribute the biochar pellets (1 bag covers 100 sq. ft.) and dig them into the top 6 inches of soil.  Then cover with a layer of compost and water deeply.  I opted to mix in a couple inches of compost along with the biochar, since the soil needed it for the coming season.

Biochar mixed with compost (before tilling in)

After turning under the compost and biochar, I layered on another inch of compost and watered.  Usually the addition of compost alone helps increase the soil’s ability to absorb water, but it would still be dry the next day. After a week of watering, I noticed that the soil wasn’t drying out.

This is just the beginning of the test, but I’m hopeful that it might solve my hydrophobic soil problem.  Another gardener in my area of the community garden also bought biochar and will be testing it as well.  We’ll report further progress and results as the season progresses.

Podcast: Growing Our Gardens & Ourselves with Marcus Bridgewater