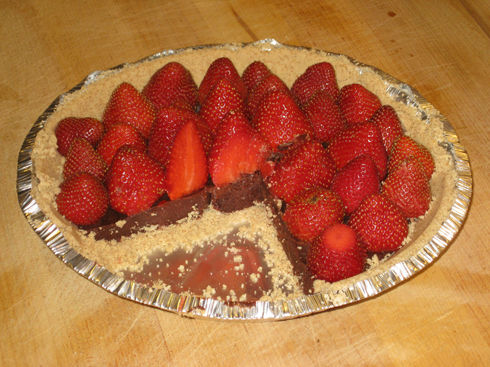 Have you ever had a recipe lying around that you keep for years, just knowing that someday you’ll make it?  Year after year, I’ve flipped through my binder of torn-out recipes from magazines that I’ve collected over time. My eyes have landed on this one page a hundred times, and each time I’ve promised myself I’ll make it.  This week I finally made good on that promise – 15 years later.

It’s strawberry season, and I harvested a bucket of bright, juicy berries that were screaming to be made into a dessert.  The time had come. 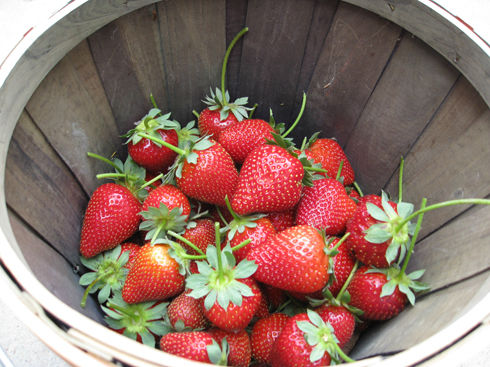 The recipe in question is from the April 1995 issue of Better Homes and Gardens Magazine. Fresh Strawberry and Chocolate Pie.  With a relatively simple list of ingredients and a very tempting photo, this pie can be made without much effort.  Melt the chocolate, beat in the cream cheese, mix in the honey.  Spread the whole thing into a prepared pastry pie crust and refrigerate it for a couple hours.  Then core the strawberries and top the pie with them, and drizzle with melted chocolate if desired.

Would you believe that after all this time, when I finally end up making the pie – I don’t have all the ingredients??! So I improvise.

Instead of using a pastry crust, I found a graham cracker crust in the pantry.  I only had half the amount of cream cheese required – eh, it’ll be fine… At least all of the ingredients were organic and fresh.

In the end, the pie was delicious, even with substitutions, and even without the chocolate drizzle on top (mine seized as I was melting it, so I ate it off the spoon instead).

Cross cut of Fresh Strawberry and Chocolate Pie – imagine drizzled chocolate on top of the strawberries.

What’s your favorite way to prepare strawberries while they are in season?  Share it with us here.