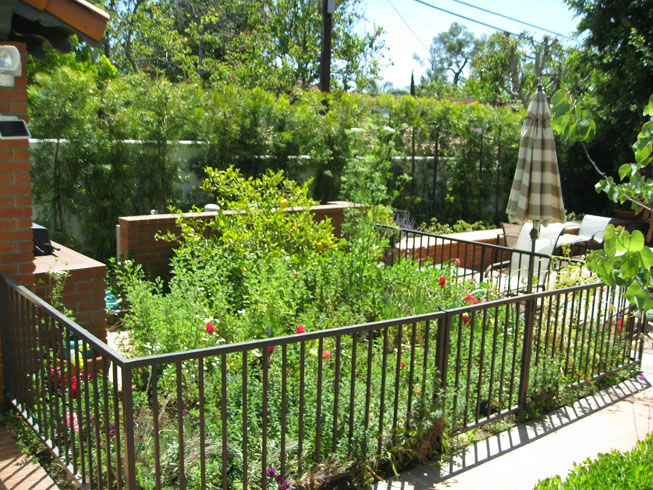 Have you ever planted mint, thinking that it would be a nice addition to your vegetable or herb garden, only to find that in no time at all it had taken over your garden and choked out your veggies?  Well that’s what happened to Joan Wilner in Beverly Hills.  She called me up to rescue her waning vegetable garden from the claws of the overwhelming mint patch a couple of weeks ago.

After meeting with her, we determined that she wanted to start small and use an in-ground planting method, rather than constructing raised beds.  We also noticed that her lemon tree needed some attention.  We talked over what she would like to grow for the summer, and then I called in the troops. Here’s what it looked like before:

The lemon tree in the back needed it’s own space.  Expiring veggies lingered as some flowers struggled for survival. 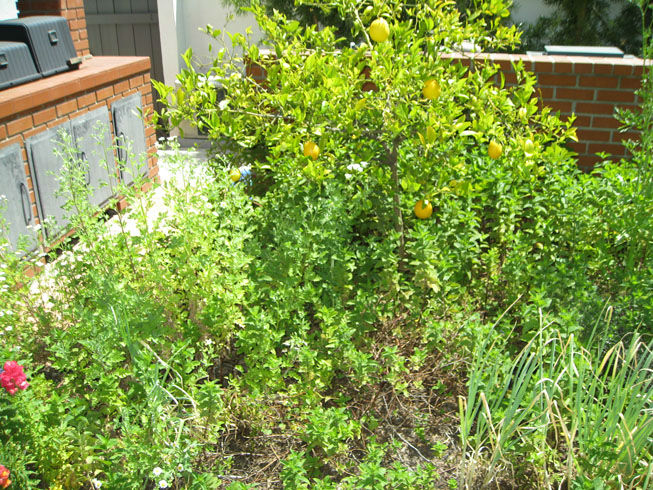 Mostly mint and a few onions reaching the end of their life cycle.  We had our work cut out for us.

The crew came in and dug out all the mint (whew!) saving a few pieces to plant in pots for containment.  They saved some of the herbs to replant like sage, oregano and thyme, and then mixed in several inches of compost to prepare the soil for planting.  We then placed pavers through the garden for a clear pathway, and created a rock tree ring around the lemon tree.  That would allow us to work in a layer of acid-loving plant mix and citrus fertilizer to help coax the tree back to health.

Then the Gardenerd Team came in to plant the new veggies. 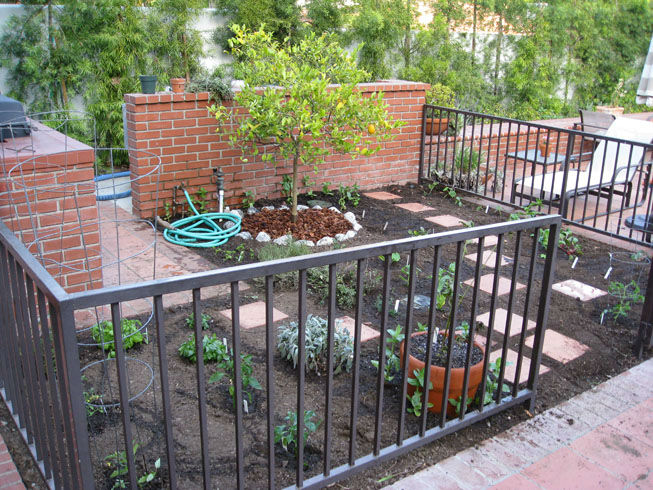 We planted 6 tomatoes (3 on the left of the picture and three to the right of the entrance – one is in view), a few peppers, basil, zucchini, arugula, and Swiss Chard.  Persian cucumbers were planted along the far wrought iron fence to climb and add some vertical visual interest.  We also planted carrot and beet seeds.  We potted the mint cuttings in a terra cotta pot by the entrance and surrounded it with zinnias, Joan’s favorite flowers. The herbs – parsley, thyme, oregano, sage, and basil –  were placed along the pathway for easy access when running out from the kitchen.  We also tucked a few more zinnias around the back of the lemon tree to bring some color to the brick wall.

We left plenty of space for Joan to get around in her garden and decided not to mulch just yet, so that she could spot any wayward mint sprigs that poke through the soil (as they most likely will do).  It will be easier for Joan to tackle the mint if she can see it.  Down the road we may install raised beds to give Joan a more bio-intensive garden, but for now – it’s exactly how she likes it.  I hope to post pictures as it grows in.

Not bad for a day’s work!

Tips to Freeze What You Grow