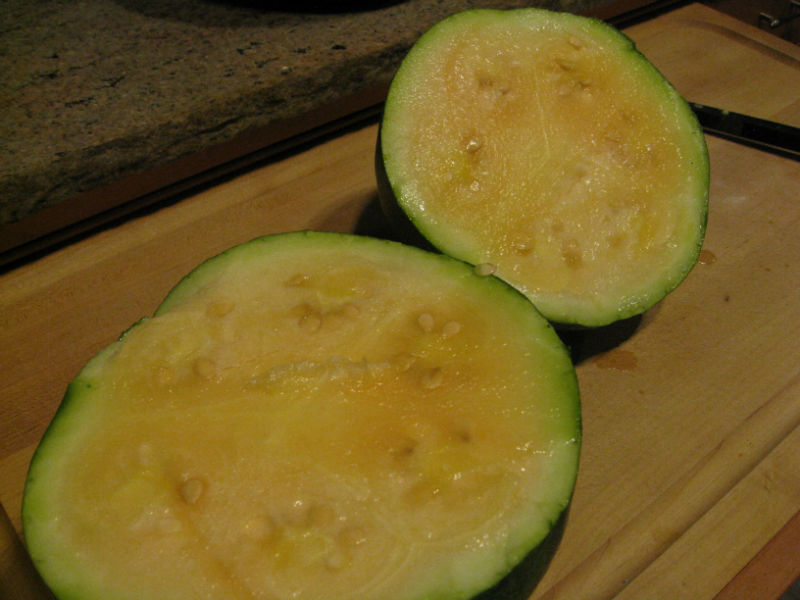 Behold the yellow sweet flesh of the Golden Honey

Chalk it up to climate change, or just a fluke of nature, but we’re harvesting watermelon in November. Not just any watermelon, Golden Honey watermelon.

Our other watermelons grew within the appropriate time frame expected from any hot weather crop, but the Golden Honey just whimpered along, producing compact vines but no flowers. Long after we harvested our other watermelons (and just about the time we were planning to pull out the unsuccessful plant) a heat wave came along and BOOM! Sudden accelerated growth.

Within a week, vines covered the raised bed and spilled into the pathways. Tiny fruits turned into oddities in the fall garden. Beautiful, succulent oddities. We gave them feedings of kelp emulsion, but I don’t think they needed any help.

This week we harvested the last of these beauties, even though the tendrils were not completely withered, because the vines were dying back. There was still doubt that they might actually be yellow fleshed. All doubts were dispelled with one slice of the knife.

The taste was floral and sweet. Definitely a watermelon, with a hint of honeydew. This is a heavy-seeded watermelon, with seed clusters spread out in 6 circles across the surface of the melon. Still, its seedy nature doesn’t outweigh the satisfaction of eating a yellow watermelon fresh from the garden in November.

Mother’s Day Brunch from the Garden