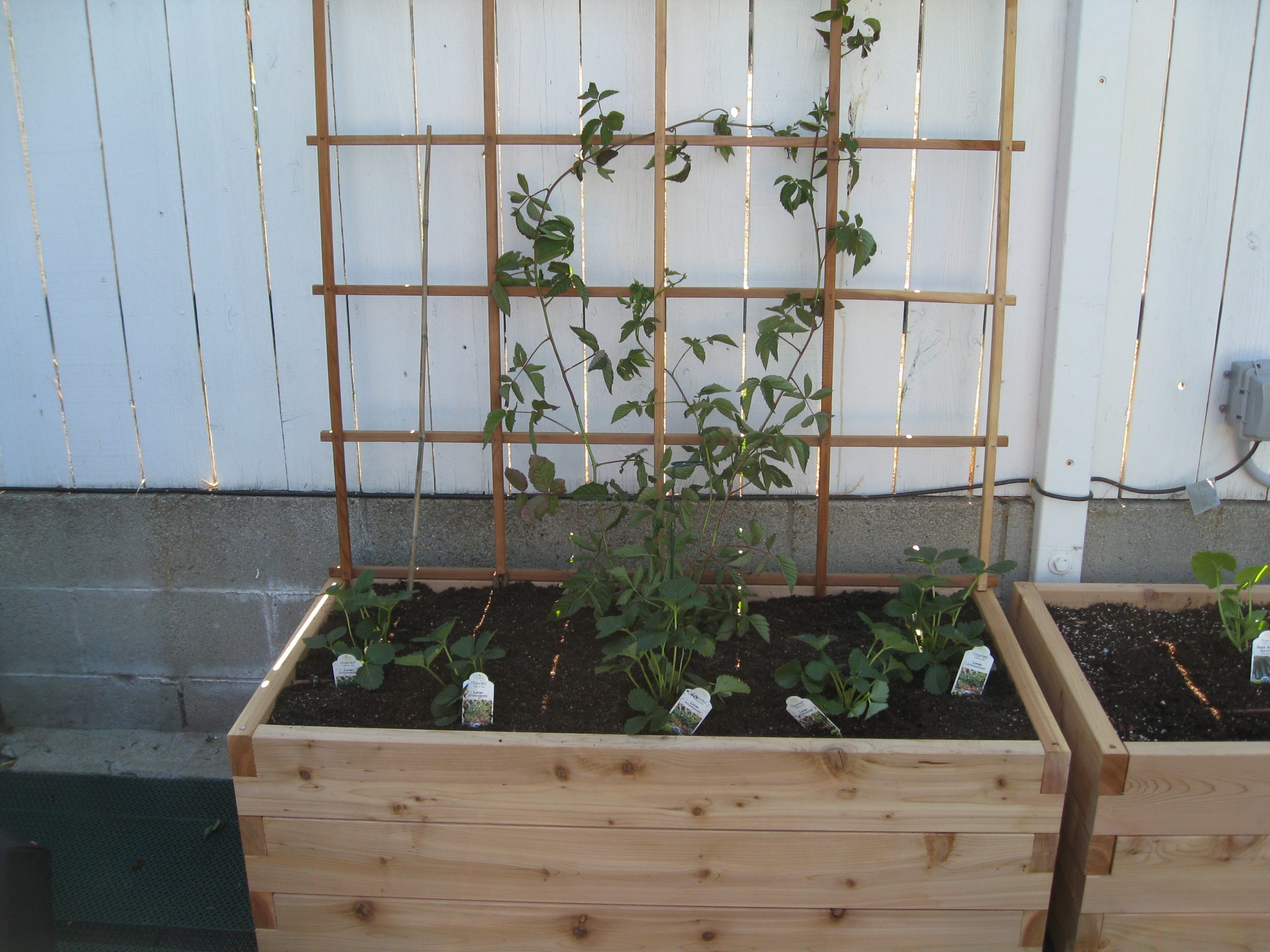 A family in Manhattan Beach called us saying they were “accidentally” growing pumpkins in a plastic storage container, and they wanted a real garden instead. In truth, they had great instincts and those pumpkins were growing like crazy on their back yard patio. It was also true that they needed more space to grow food.

They had several fruit trees successfully growing in the ground, but they had blueberries, grapes, boysenberries, and tomatoes growing in pots; many of which were outgrowing those pots.  The backyard was primarily dedicated to half-court basketball and an above ground pool for the kids, leaving little space to commit to a veggie garden.

We found a spot off to the right of the pool that gets morning and mid-day sun year-round. We also found a great solution that would work for both parents and kids. MiniFarmBox makes Rolling Patio Boxes that move out of the way if needed. The only issue was water. There was one water source, located over 50 feet away.

We ran a new water pipe to our raised bed location and added a battery-operated timer with drip tubing. We also created a new in-ground home for the family’s grapevine, and built a trellis, Napa Valley style, along the wood fence.

The family plans to paint the new posts and water line when they re-paint the fence in the near future, so the new additions will blend into the existing materials. The raised beds sit on the basketball court, out of the way of the action. It’s the perfect starter garden.

Their new raised beds hold a berry garden, with strawberries and the boysenberry plant that had been stuck in a pot. Actually, the boysenberry had died during the planning process, so we replaced it with a new one. Now it has room to thrive.

The middle bed holds watermelon and zucchini (only one each, folks!) and the last bed is chock-full of summer veggies. All beds have drip irrigation on an adjustable battery operated timer that even the kids could use.

The beds are just the right height for all three boys, and as it turns out, just the right size for the adults as well–leaving plenty of room for basketball, the father’s favorite pastime. As we were planting, mom said she originally was doing this for the kids, but she realized it was really for her. A little Mother Nature to counteract all that male energy, right?

Maybe when the kids are grown the family will expand the garden, but for now they have a small space to enjoy growing fruits and veggies along with all the other activities in the yard. This court-side veggie garden can reward the victor with sweet treats when the game is over.