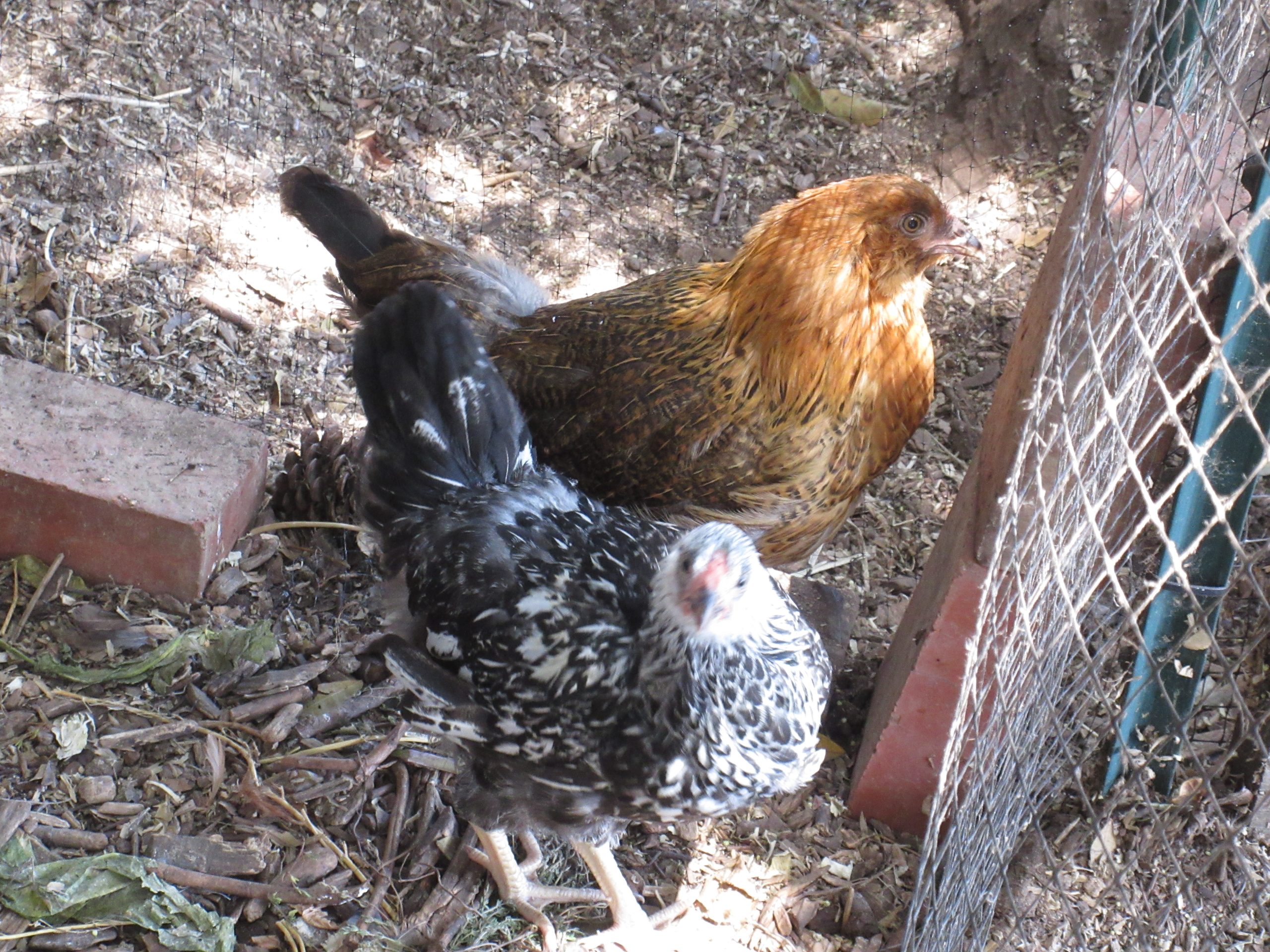 We got two new chickens in the midst of a chaotic week after the 4th of July. What was going on? We were trying to plant the last of the summer gardens with clients, for one thing.

We also had to euthanize Eunice, a 3-year old hen that wasn’t feeling well—and the other girls were picking on her so badly she was hiding in the roost all day. We finally found a farm vet in Los Angeles who would do the task humanely without demanding elaborate (and expensive) testing before putting her down. The necropsy report is pending.

Our friends at Dare2Dream Farms delivered these two hens just as a family of 5 people were visiting the garden. There was a lot of commotion and someone (Eloise!) escaped almost immediately. I forgot how hard Easter Eggers are to catch. So speedy!

Eloise – our new Easter Egger. She’s about 12 weeks old and already searching for ways to escape. She coos as she takes dirt baths. She will lay blue/green eggs in about 8 weeks.

Sally-Ann – our new Silver-laced Wyandotte. She’s younger, probably 10 or 11 weeks and still peeps like a chick. Oh the cuteness! She will lay peach/tan colored eggs eventually.

Chickens are So Chicken

Chickens are aptly named; they’re afraid of just about everything. These two arrived terrified, but we quickly gave them food and water and settled them into their new digs: an old dog crate with plenty of room to hide / rest / roost, and a small run with places to scratch and peck. They are within the line of sight of the existing flock so they can all get used to each other before being integrated.

So far, they haven’t figured out how to poop in their water dispenser or tip over their feeder yet, so…small miracles. We’ve introduced them to this thing called “kale” and they seem remotely curious.

To integrate them, we’ll go out at night after a couple of weeks, and move the new babies into the roost of the existing flock. They will wake up as if they had always been there. It makes it easier for the rest of the flock to accept them. It has always worked in the past. Stay tuned for more as these new babies grow.

A Chicken and Her Cankles