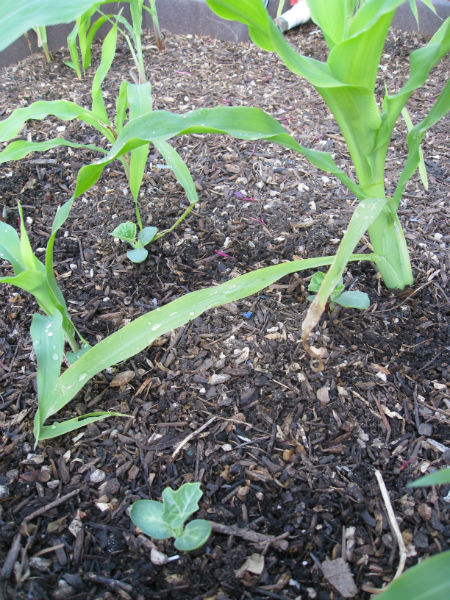 Corn and a mystery cucurbit -most likely cucumbers grow together this season.

You’ve most likely heard of companion planting, so interplanting won’t be entirely unfamiliar to you. It’s basically the idea of planting two or three different plants together to take advantage of available space, and to benefit the plants involved.

For example – by alternating plantings of lettuces and kale in rows, you can take advantage of slow-growing kale by using the space in between to grow a quick crop of lettuces. Another example is radishes and artichokes or squash. You have to leave a lot of room for squash and artichokes to grow, but you can interplant them with quick-growing radishes that will mature and be harvested long before squash or artichokes grow to full size.

We have millet and green onions interplanted in our test garden. As the green onions mature, we’ll harvest them, leaving the millet to grow tall.

We’ve also allowed nature to interplant for us. This year’s corn bed was the home of last year’s cucumbers, which seem to have sprouted up in the soil from seeds left behind. We’ll see what happens as they grow in together.

Even if they turn out to be some kind of squash, they will serve as a ground cover, a living mulch for the corn. We’re not worried…but check back in a couple months.

This idea of using polycultures in the garden, as opposed to monocultures (rows and rows of one thing) helps add diversity, which in turn provides balance. Pests are less likely to consume a plant if other varieties are nearby.

Toby Hemenway, author of Gaia’s Garden, describes a sample polyculture is his book:

In the ground on week one, plant radish, dill, parsnip, calendula and lettuce seeds. Broadcast them over an entire area (this might not suit the neat freaks among us, but we can modify).

Four weeks later pick some of the radishes, then plant the cabbage seedlings in those spaces.

At six weeks, thin out some of the lettuces and continue harvesting leaves and radishes.

In late spring/early summer, plant bush beans where the lettuces were. Over time the dill and calendula will be ready to harvest as well as cabbages. Replace those plants with more beans. Finally the parsnips will be ready to pick at the end of the season, and cover crops or fava beans can be planted in those spaces.

In our test garden, we like to plant watermelons as the potatoes are dying back. Not only are they good companion plants, but watermelons grow slowly at first, making it easy to harvest potatoes without damaging the plants.

There are a myriad combinations to choose from. Do a quick search for “polycultures” or “interplanting combinations” and you’ll find many more suggestions.

Back to the Roots with Mushrooms