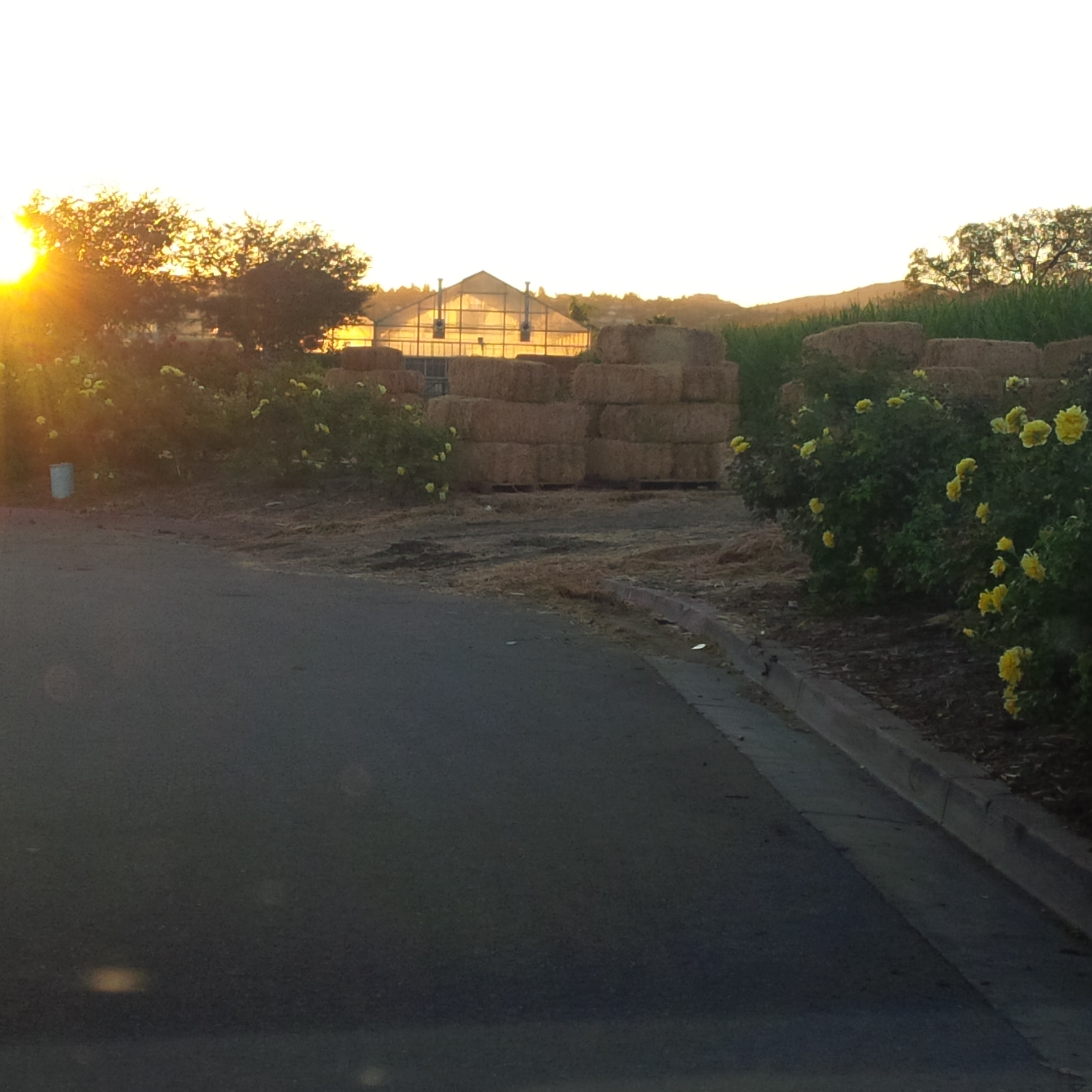 Round the corner to the entrance to the farm and you're greeted with roses and hay bales.

It was 5:30 in the morning when I got in the car to drive the hour it would take to get to Cal Poly Pomona. By the time I arrived the sun was just creeping over the mountains, streaking light across the sleepy landscape.

It revealed acres of open pasture, rows of fruit trees and yes, even the classic red barn. Translucent greenhouses glowed amber in front of the sun’s assent. After driving through the long stretch of city life, this was a welcome sight. This is Kellogg Ranch at Cal Poly Pomona.

I arrived early, so I took advantage of the extra time to drive along the fields and take a gander. Up the hill I went to see what there was to see.

A little further up the hill revealed what I consider to be the coolest fruit ever, growing up stakes in all its awkwardness: Dragon fruit!

It wouldn’t be Southern California without orange trees and avocados, but I was surprised to find date palms also included in the farm’s assortment of offerings.

Since Halloween just passed, the remnants of the farm’s pumpkin patch were still evident. Scattered pumpkins lay in the field. It was tempting to hop the fence for a closer look (and maybe to borrow one or two), but I stuck to the road.

They had just plowed a corn maze (not maize, but a maze) into the ground, so the ground was littered with discarded ears of corn and shredded stalks. One couldn’t help but wonder if it was genetically engineered corn. I didn’t ask.

The Farm Store, as it is called, is the place where people can buy produce and pasture-raised meat from the farm. Students learn the trade from field to shopping cart. It was still decorated for the recent pumpkin festival and even though the pickings were slim, the decor was still delightful.

Across from the Farm Store, I spotted something unusual that required further investigation:

What would a college Ag site be without experimentation? Stakes of PVC skewered polystyrene containers, which were stuffed with strawberry plants. Irrigation tubes ran across the tops of each tower, circulating nutrients and water. It was a curious image in the midst of all that is natural. Then again, colleges are charged with the task of exploring new technologies and finding new ways to grow food for a growing population, so this seemed right at home.

My day at Cal Poly was intended for an entirely different purpose, but it ended up being a field trip to the wide open spaces of wonderment and farm-tastic-ness. Stepping out of the city and into agriculture is something I think we could all do more often. It brings us closer to our food sources, and brings with it a closer understanding of what farmers do to keep us thriving.