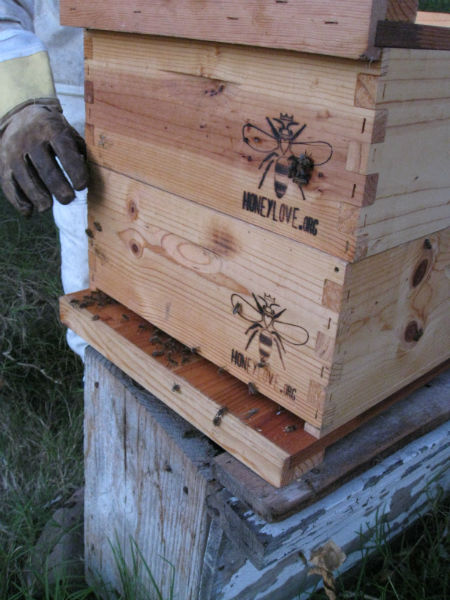 Every once in a while, bees find a home at Ocean View Farms organic community garden. Sadly, we can’t legally keep them there, but instead of calling the exterminators, a bee rescue team came to relocate them to a new home.

I was on hand for said event, and it was thrilling to watch. Here’s a play by play.

The bees had taken up residence in a storage box. Rob McFarland of HoneyLove.org lit a smoker to start the process. Smoke calms the bees, making them feel less threatened and easier to work with during the move.

Once the smoke settled, Rob lifted the lid to the storage box to reveal several honeycombs covered with bees. Pictured above, that brown blob hanging from the cover is our bee hive.

With a new hive box and frames nearby, Rob began the task of removing the hive. He cut the combs, one at a time, and gently brushed the bees into the new hive.

Next, Rob needed to size the combs to fit the new frames. He was careful to keep the comb in tact. This was the labor intensive part. It took quite a while to re-size each comb (there were at least 6 in the storage box). We stood by with frames ready to receive the new comb.

Rob used rubber bands to help secure the comb in place. We didn’t have enough rubber bands, so we used red thread (shown above, bottom right corner). When asked what the bees do with the rubber bands and string, Rob said they chew off and discard them once the comb is attached to the frame.

We were accompanied by George Langworthy, director of Vanishing of the Bees, who was filming the entire process for a series of videos he plans to produce. We’ll post that series when it goes live.

Probably the most picturesque moment was when we discovered that the bees had built several layers of honeycomb around a garden rake in the storage box. It summed up the spirit of gardening and how intertwined we are with bees.

As the sun set, we completed the move from storage box to new hive. The bees settled in for the night.

We left them overnight to adjust to their new surroundings and went back at sunset the next evening to retrieve them. Rob wrapped the hive boxes with a strap to secure them, taped over the entrance, and off they went to their new home.

One of the perks was the gift of nectar. We took a little left over honeycomb home to eat as dessert. It was heaven on a plate.