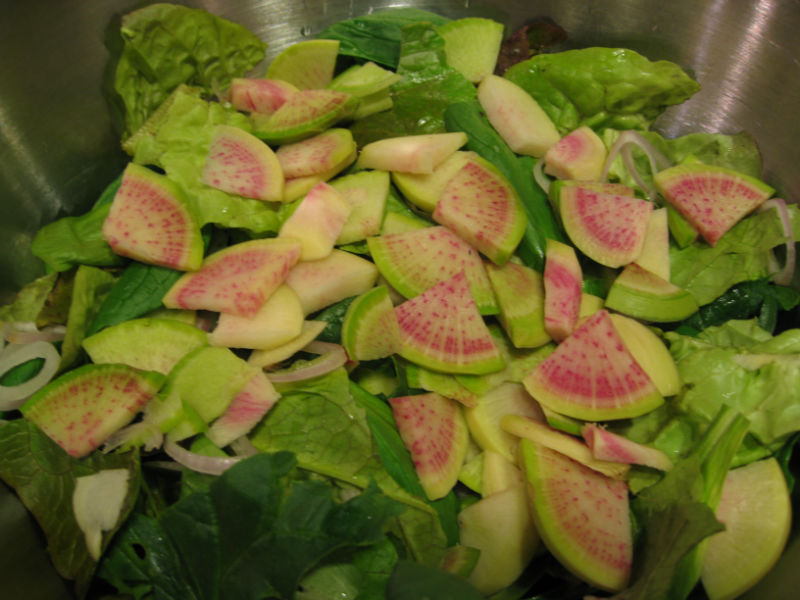 Just to be clear, it’s not a watermelon and a radish in this salad, it’s two Watermelon Radishes. If you haven’t grown them, put them on your list of “musts” for this season.

Watermelon radishes look boring on the outside; their whitish-green exterior doesn’t lend much excitement to a dish.  Cut them open, however, and you’ll find jewel pink centers that make other vegetables jealous. There’s a trick to growing watermelon radishes though: you have to let them get large–about 2 1/2 to 3 inches in diameter to achieve that color.

We didn’t know that ahead of time, and harvested our radishes along with other varieties when they were an inch in diameter. Oh well, they still make an impression.

This recipe comes from the February 2012 issue of Sunset Magazine. It’s been sitting on the shelf since we bought seeds and we’ve been eagerly awaiting the opportunity to make this dish.

Because we used a variety of lettuces, mustard greens and arugula, the salad was–IMHO–much more interesting than butter lettuce could ever offer. Serve this at your next dinner party and you won’t need a centerpiece.

YouTube: How to Harvest Carrots and Other Root Vegetables