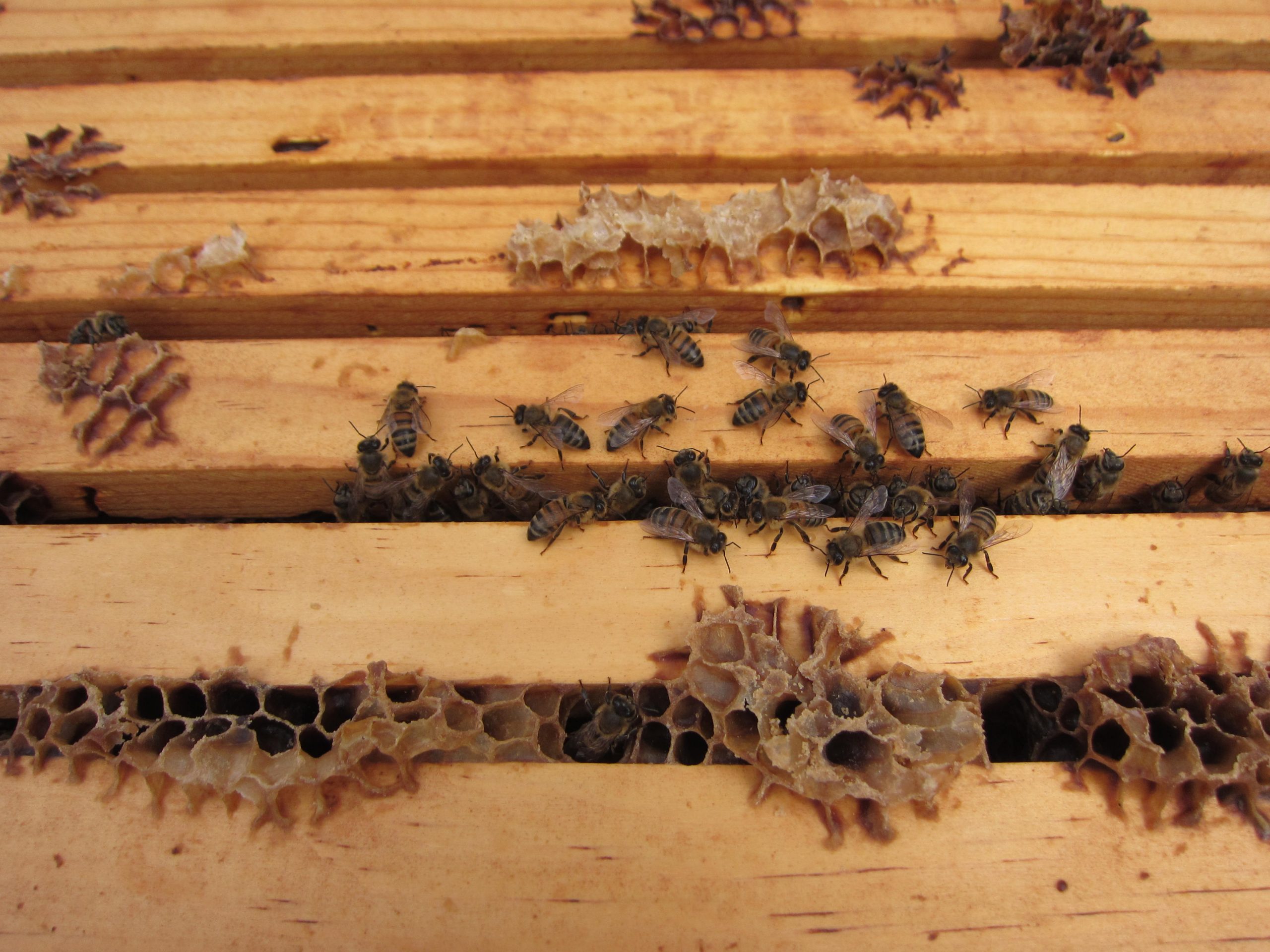 Only a few dozen bees remain in the hive.

Our 5-year-old hive up and died the other day. About a month ago, we noticed a pile of dead bees outside the hive. We didn’t think much of it at the time. We’ve seen it before and nothing bad happened. We inspected and everything looked active and fine. But then…Bee death.

It appears to have taken several weeks for most of the bees to leave or die, but when we cracked open the hive the remaining bees numbered in dozens instead of hundreds. Our mentor, Ceebs from Honeylove.org, came over to help diagnose the issue.

Ceebs helped us look for swarm cells, which would indicate that the bees left on their own with the queen, leaving behind a new queen to take over. We found a few test cells but nothing that indicated the hive swarmed or made a new queen.

What does this mean?

When a hive dies off without evidence of having swarmed or at least an attempt to re-queen the hive, it means they most likely died unexpectedly from poisoning. “Someone probably sprayed their lawn with Round Up or something,” Ceebs said. We have no way of knowing for sure, but it’s the most likely reason, given the lack of swarm cells and no evidence of disease or infestation.

We saw a couple of hive beetles, but not enough to be the cause of the issue. Ant activity increased in the last few weeks (a sign that no one is defending the home) so we put out a Terro bait to reduce the population. Bees are unable to access the bait so it’s safe for use around the hive.

It was clear that the hive suffered the loss of the queen since there was zero evidence of activity in the brood nest. No larvae to speak of.

So we took the opportunity to clean out the hive. “Not clean for a human, but clean for a bee,” Ceebs instructed. We straightened out a few brood frames that were cross-combed (comb drawn outside the lines, across several frames instead of along one frame), and selected a few honey frames to return to the second super. We left the hive ready for a new swarm should one arrive.

And Then What Happened?

A day later, a friend saw my Facebook post about our bee loss and notified me of a swarm that had just arrived in her apartment courtyard about 25 miles from here. We suited up, loaded the ladder, and headed out to rescue the swarm.

A couple hours later (the drive took longer than the rescue) we had new bees. Perfect timing, thanks to friends with connections.

We took advantage of the loss by harvesting some of the honey from our hive during the cleaning process. We’ll crush and strain this 2018 vintage, and we’ll probably label it “The Last Hurrah” or something more clever.

Our new hive has settled in and is cleaning up the hive inside. Hopefully they will stay. Our job now is to educate the neighborhood about pesticides and herbicides, and the damage they cause to our bee population.

Get Growin’ This Fall