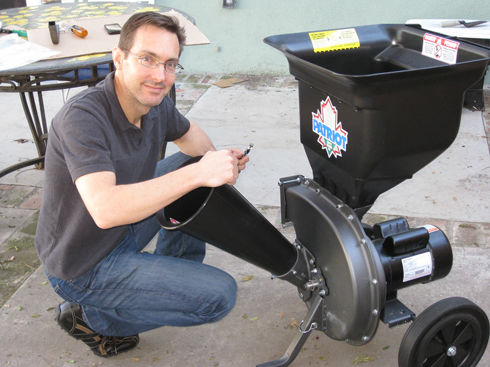 NERD ALERT!  This one is for you. You know who you are.

Question: How do you solve domestic disputes between husbands and wives who have differing opinions about how composting should be done?

Answer: You get a chipper/shredder and then everyone is happy.

The Problem: You see, I sit squarely on the side of the fence that prefers to chop up all the green and brown bits into small pieces before it goes into the compost bin – because it breaks down faster, and is easier to turn and sift out the finished compost in the end.  A little work in the beginning means less work at the end.  Right?

He sits on the “throw it all in as is” side of the fence.  It eventually will break down and become compost anyway, so why work so hard in the first place?

For years I attempted to sneak large green materials into the City’s green waste bin, because it was too much of a pain to cut up by hand for the compost bin.  That didn’t go over too well.

A man and his shredder

We received it from his father, who obviously heard our plea for help.

This weekend we tried it out for the first time.  After pruning the front yard shrubs (dodonaea, ceanothus, and pittosporum crassifolium) we had a mountain of greenery on hand.  We also had a cover crop of hairy vetch to shred from winter. 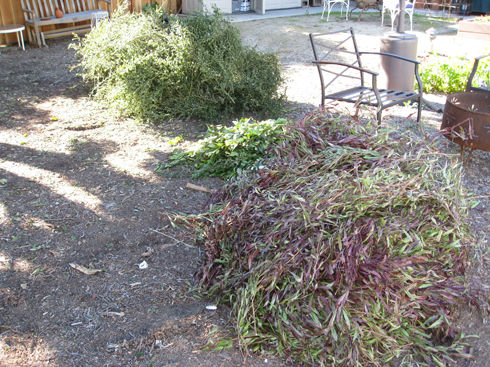 The shredder performed well on the front yard shrubs, but was challenged by the hairy vetch.  We clogged it up a few times, but turning it upside down and hosing it out helped to clear the clog.  After talking with the manufacturer (they called to see how we liked the product), they suggested that we mix the soft green things with a few branches of woody material to help it go through easier. They also suggested that we leave the soft greens out to dry for a couple days, after which the moisture would evaporate and be less likely to clog the machine. 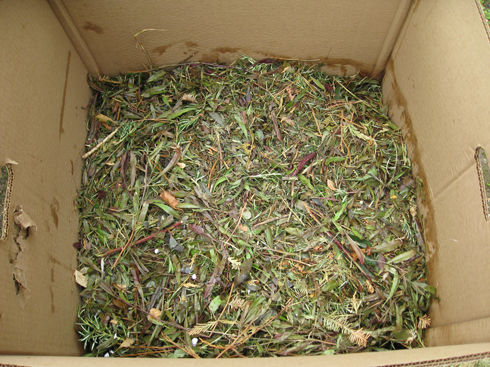 In the end, we added 3 layers of browns and greens to our compost bin (a
temperature check the next day showed 140 degrees in there!) and we
mulched a pathway with the rest. 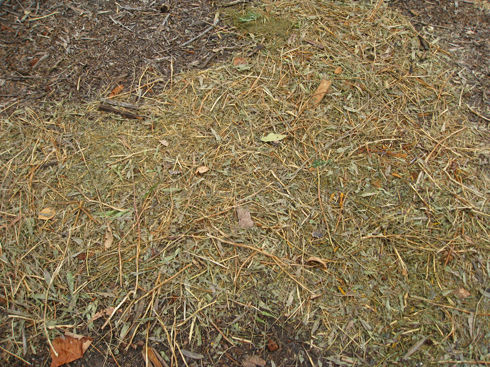 Mulch in the pathway

Now there’s not a shred of evidence left, and nary an argument to be heard.

What’s your favorite gardening tool?  How has it saved your marriage?  Share it with us here.