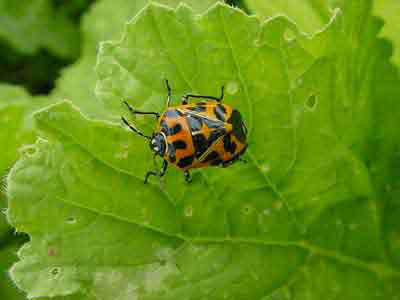 They look kind of funny, maybe even cute, but harlequin bugs are no laughing matter.  If left to their own devices, they’ll mutilate a plant within an inch of its life.  They like brassicas – a lot – and this year they found my kale.

The Harlequin Bug (murgantia histrionica) is a True bug, and a stink bug – which you only find out when you squish one. They are black and orange and are often found connected to (A.K.A. mating with) another harlequin bug as they eat tiny holes in the leaves of cabbage family crops, sucking the life from them.

Click here to see a Harlequin bug in all its stages of life:

Their life cycle is between 50-80 days, and they tend to show up on fall or spring.  Nymphs can’t fly, but adults can.  Here are a few ways to control their nasty presence in your garden:

Diatomaceous Earth – this powder consists of crushed up, single-celled organisms from a billion years ago. Sprinkling it on insects will poke holes in them and dehydrate them.  You must re-apply after rain or irrigation however, as it only works when dry.   Harlequin bugs are clever and can move quickly to the underside of leaves out of your way, so work quickly.

Trap Crops – you can use your Brassica crops to trap bugs in a concentrated area.  Throw a bag or tarp over the bug-infested plant and remove it.  Farmers usually burn these trap crops.

Hand Picking – your best bet is to hand-pick the little buggers off and either dropping them into a cup of water or squishing them by hand.  Be vigilant and check every day for new nymphs.

UPDATE: we’ve found the best way to catch them in large numbers is to get 2 buckets. Fill one bucket with about 2″ of water with a drop of two of dish soap (or spray Safe Soap on the surface), then hold the second bucket under the plant and shake the plant toward the bucket. The bugs will fall into the bucket by the dozens. Drop the bugs into the other bucket with soapy water and they will die quickly.