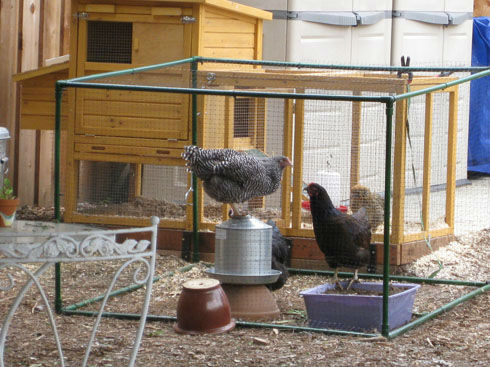 It’s been two years in the making…

And No One knows what to expect…It’s…

Our pullets arrived late one Tuesday evening.  They put themselves to bed shortly thereafter, so our introductions were made the next morning. We were instructed to keep them in the main coop/run for a few days to get them used to their new surroundings – to know where “home” was.  That’s just what we did.

After 4 days we released them into the portable run, and they took to it immediately.  We offered a dirt bath (the purple bin shown above), and they are obsessed with it.  Chickens take dirt baths to protect themselves from mites, fleas, and lice.  Additionally, we sprinkled diatomaceous earth in coop, run and portable run for extended protection.  Diatomaceous earth can also be put in the food.

Let’s meet the hens, shall we?:

Polly the (Plymouth) Barred Rock.  She is first to the food, and investigates everything ahead of the others.  She is most likely our alpha hen. 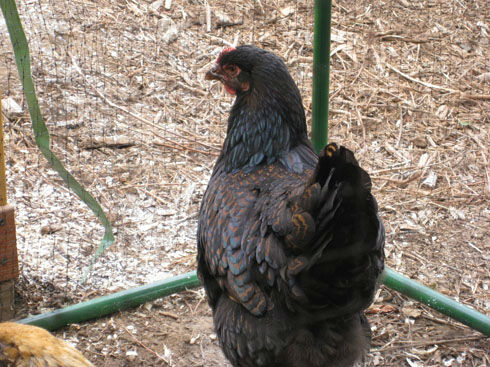 Blanche the Barnevelder.  She’s talkative and is probably the second eldest of the group. 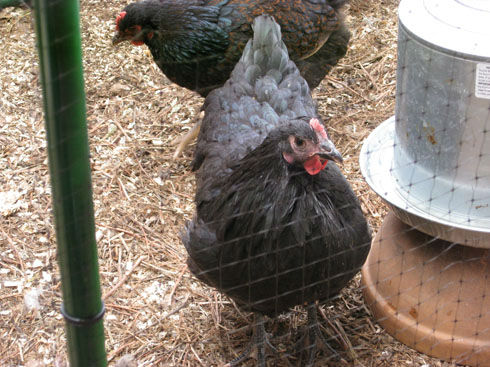 Sneezy Biddy the Australorp.  She came to us with a cold, but seems to be getting better with the help of some medication.  Her feathers are black with a blue/green sheen like a Japanese beetle.  We suspect she is the oldest and will probably start laying first. 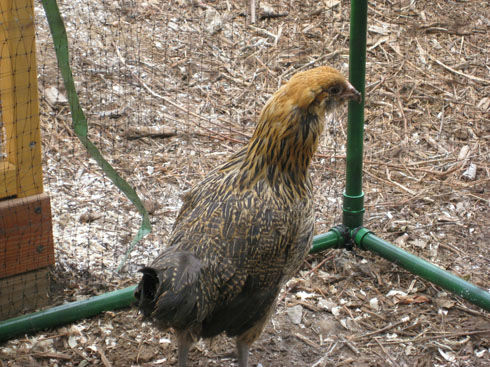 Ethel the Easter Egger.  Our youngest and smallest.  She squeezes into places underneath the others.  We find her wedged up next to Polly the Barred Rock every day.  Her eggs will be blue or green (we hope) or pink.

Snacks: We’ve been advised that chicken scratch is crack, so we didn’t buy it. Instead we give them black oil sunflower seeds and scraps from the garden.  They tear apart arugula, lettuces, kale and just about anything we give them.

Water: Our watering can holds 2 gallons, which we refill every other day.  We tip the waterer over to clean out the gunk and wipe out debris every day.

Coop:  Using our dearly departed cat’s pooper scooper and bucket, we clean out the coop daily and replace any bedding when it gets low.  We choose this method rather than the weekly dump and refill option.  This saves money on bedding.

Run: We were advised not to put down bedding in the extended run. They are happy to peck and scratch in the dirt.

Bedding: Pine shavings instead of straw appeared to be our best choice.  Pine shavings apparently absorb moisture best and provide a more inhospitable environment for lice and bugs to breed.  We bought a bale at Malibu Feed Bin and expect it to last several months.

Overall we are delighted with out new hens.  They provide hours of entertainment.  They inform us daily of what they need and are relatively self-sufficient otherwise.

The perch is supposed to be the highest thing in the coop.  If not, they will not use it.  Our perches were lower than the egg boxes, so they slept and pooped in the egg boxes.  They also slept on the floor of the coop – not good considering that 50% of the pooping happens in there.

We raised the perches and lowered the head space in the nesting boxes with some cardboard.  Lowering head space means they can’t stand up to poop.  After a few days, the girls were sleeping on the perches and stopped relieving themselves in the nesting box.   We have since removed the cardboard, and all is well.   Special thanks goes to my husband for figuring all of that out.

As the days get longer, and they reach maturity, we hope to see eggs.  For now we are enjoying the free entertainment and fertilizer.