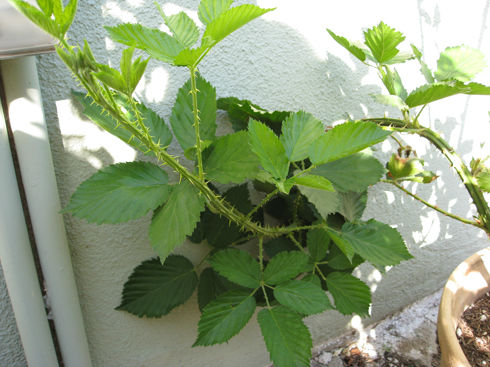 Every once in a while I get a question that I don’t know the answer to.  This week was one of those times:

“I am planting some yellow raspberries this spring. I am now able to
harvest strawberries in the spring and blackberries in the summer. I
selected the yellows so that I could have a fall harvest of fruit.  What
do I need to know to encourage this to happen? What should I expect
the first year?”

Cane berries can be fun – thorny, but fun.

Firstly, here are the varieties of yellow raspberries that will fruit in the fall, according to Wikipedia:

If you have one of those varieties, then nature will take its course and you should have fall fruiting berries.  I found some research that stated that most yellow varieties have similar growth habits to red raspberries, in that they have upright canes, are cold hardy and have large berries.

Growing Yellow Raspberries – A lot of yellow raspberry varieties are everbearing, which means they produce two crops per year, one in the spring and one in the fall.  According to Ohio State University’s page on Raspberries for the Backyard they grow best in sandy loam with plenty of organic matter. Raspberries prefer a pH between 5.5 and 6.5, and good drainage is necessary.

Pruning Yellow Raspberries – Iowa State University recommends pruning yellow varieties just as their red counterparts are pruned.  If you are interested in two crops (spring and fall) you can follow these instructions:

“How to prune fall-bearing red raspberries for two crops:

In March or early April, remove all weak, diseased, and damaged canes leaving only the most vigorous canes. Also prune out the tips of the canes. The summer crop will be produced on the lateral (side) shoots of the remaining portions of the canes. Maintain the plants in a 1- to 2-foot-wide hedgerow.
After the summer crop has been harvested, remove the old fruiting canes and destroy them.”

Or…USAGardener has this to say if you want to get just a fall crop:

“To force your everbearing raspberries to produce only one crop in the
fall, prune back the entire raspberry bush in early spring. As the canes
grow back in the summer, remove outside suckers and thin the canes to
about 6 inches apart. Keep the sturdiest canes. This technique will give
you a larger fall harvest and is good if you also have summer bearing
raspberry bushes and you want to stagger the harvests.”

What to expect?
Raspberries produce on second year canes, so unless you purchased a plant that is at least a year old, you might not see fruit this year, but I’ll cross my fingers for you.

Thanks for writing in. Good luck with your berries and send us some pie when you harvest.

Help! Maggots in My Compost!