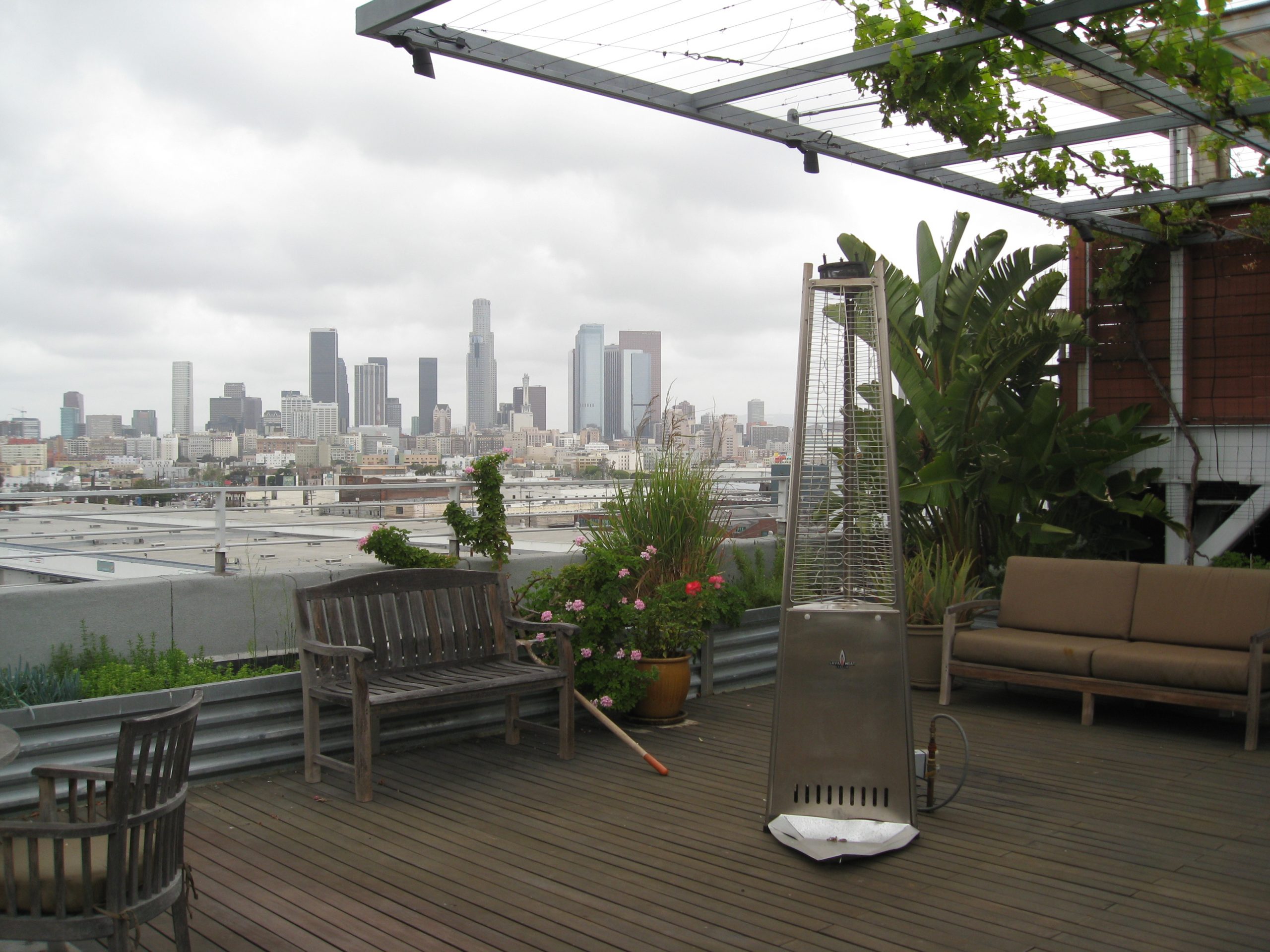 A lot of people don’t have space to garden, and in many places the rooftop is the only option. If you live where it snows, the local architecture is built to support the weight of snow, so a hundred pounds of wet soil per square foot won’t collapse a roof. Sadly in Los Angeles, many of our building roofs (or rooves, for those of an elder age) weren’t built to hold weather. A light-weight like yours truly can make an LA roof bounce just by walking on it.

But downtown in the arts district, we found a loft owner with a concrete roof (that holds 240 pounds per square foot) and a splendid rooftop garden to match. Check this out:

Not only are the views spectacular, but it’s spacious too. The homeowners wanted to grow as much food as they could in this space and still be able to entertain. They installed a section of raised beds with protection from birds and wind, where they now grow greens like Swiss chard and lettuces, as well as beans and peppers.

Along with fruit trees in pots, and even a grapevine or two, the homeowners made use of a long trough planter to grow squash, and to hold a productive olive tree.

What is quite possibly the most impressive part of this whole rooftop garden is the pond. Yep, there’s a pond.

The genius of this pond is that the roof had a low spot already, where water pooled. They turned a drainage problem into a water feature.

To prove that the sky is the limit on rooftop gardens, the homeowner installed a metal pergola for growing grapes. The vines take a beating from the wind, but still produce.

They don’t have to worry too much about bugs, even though, remarkably, pests still show up occasionally on the roof of this 7-story building. Their biggest issue is their own dog, who apparently loves to eat peppers:

The folks at Linear City strive to make livable spaces for residents in downtown LA that are environmentally friendly. To that end, they try to include gardens with all their properties, be it in front of restaurants, or near the rooftop pool. This particular building has a fleet of Leaf electric vehicles and charging stations for local commuter use. What’s not to love?!

Wordless Wednesday: Fall Gardening is ON!

Spring Gardens are Waking Up