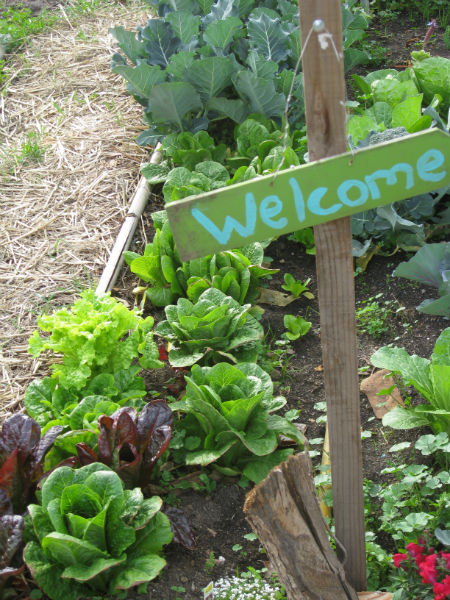 Cob is a rustic building technique that dates back to pre-historic times. It combines sand, clay and straw, and is held together with water and an abundant supply of elbow grease. These ingredients are identical to adobe, but adobe is generally formed into bricks, then dried before application. Working with cob is essentially like playing in the mud.

I had the pleasure of attending a cob workshop at Emerson Avenue Community Garden in Westchester, CA. Robert from EarthWorks Natural Building led us in an endeavor to build a comfortable seating area for the Garden’s new outdoor classroom.

Robert brought his industrial mixer that looks like a giant cotton candy machine. Traditionally the ingredients were mixed by stomping, as in wine making, but modern technology spared us from having to remove our shoes.

Robert and his team mixed the ingredients with water in batches. He demonstrated how to apply the finished product.

We went to work building a comfortable seat atop the stone sitting area.

We worked for three hours and made a fair dent in the work to be done. Building with cob is time consuming, but once it’s finished and coated with lime (for waterproofing) it lasts for an eternity. Perhaps this will inspire you to build that cob pizza oven in the backyard.

Help Out a Community Garden