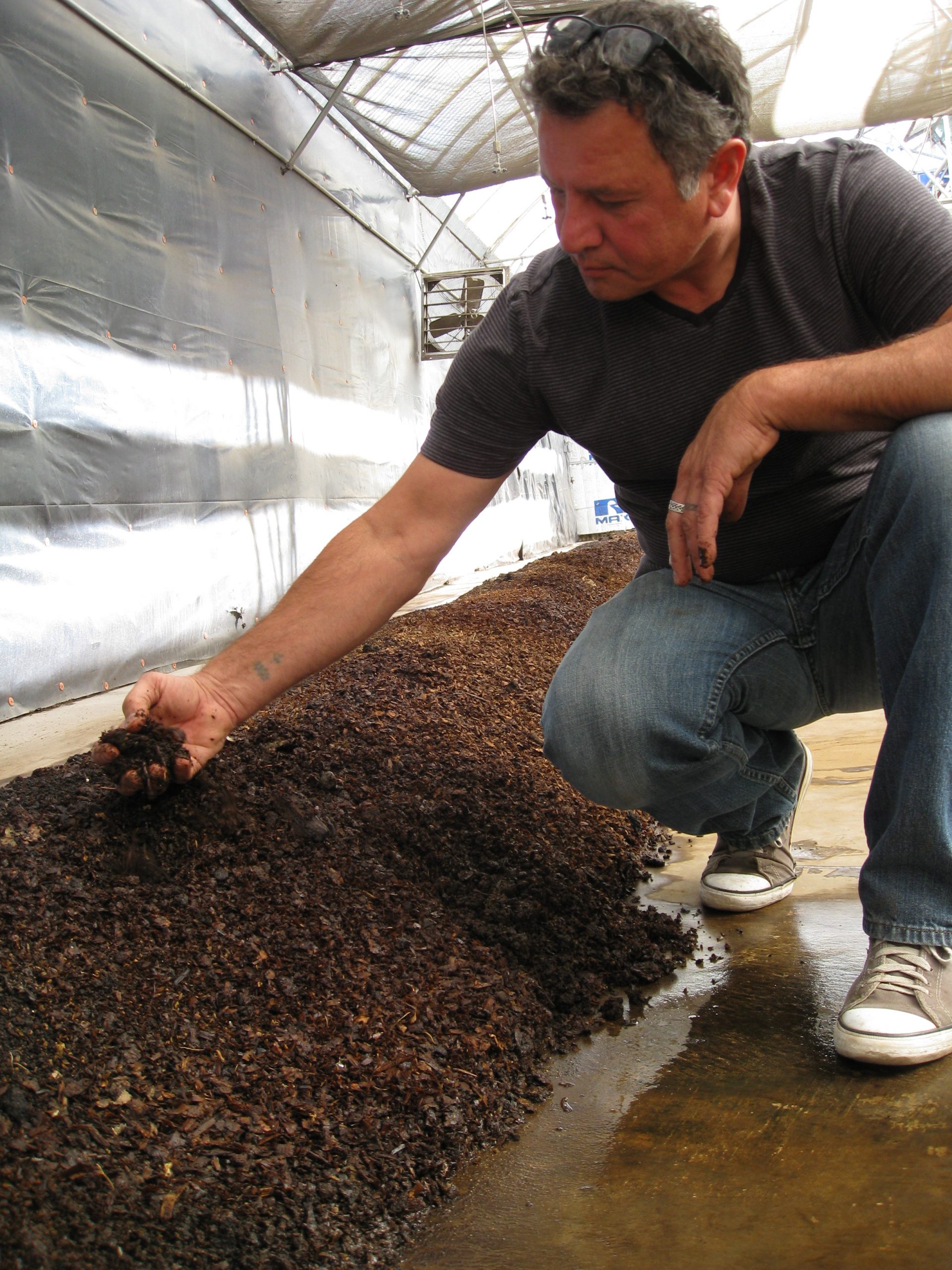 Last week I was invited to geek out with the guys at Organic Solution, a Southern California worm castings company. A pleasant drive out to Camarillo yielded more than just an earful of good-for-the-garden tidbits. These guys are elbow deep in the best worm castings around.

Located next to McGrath Family Farms, a certified organic produce company selling to local farmers markets, Organic Solution mixes up batches of premium worm castings, vermachar (worm castings mixed with biochar), and shelf-stable worm extract (tea, if you will, but not tea…more on that later).

George Keossaian and Bryan Spangle head up the company. The operation is still in its infancy, but it’s pretty impressive even now. We stood in a ventilated greenhouse with windrows of worms and bedding as mist drizzled lightly down from the ceiling, keeping the worms moist and happy.

They use high-quality horse manure recovered from a local ranch that boards horses without antibiotics or GMO feed. The bedding is mixed with food scraps from local restaurants, distilleries, and strawberry farms (the worms love those). There’s a lot of labor involved, but they feel it’s worth the time. Organic Solution provides worm castings to many of these sources in exchange for taking the waste off their hands.

Windrows are aged 5-7 months, then put into a trommel to sort the castings from the worms and debris.

In addition to the windrows, they also use what they call a bioreactor, a flow-through trough that holds 15 tons. They feed the worms on the top with food scraps and bedding and remove finished vermicompost from the bottom, then they screen it though the trommel. They expect to move the entire operation away from windrows, to these bioreactors, as the business grows.

Next we moved into the worm extract room with high-tech equipment and giant tanks. Organic Solution extract (called Ambrosia for home gardeners) is made by loading their proprietary formula into a screened drum that is churned with an auger to move it through another drum that has a finer screen. High pressure water jets strip the biology off the material, where it is then moved through tubes to gigantic tanks outside. It’s called extract, not tea.

“It’s mo’ betta than tea.” Bryan jokes. “The beauty of our product is that it’s not nearly as active as tea.” Why is that important? George explains, “All of the biology isn’t awake yet because we haven’t given it any food…our biology is suspended.” In other words, the microbes are alive, just dormant, so it’s a shelf-stable product. Most store-bought teas aren’t.  Most teas are brewed in a perfect environment for life and vitality, then bottled into a environment that isn’t ideal, so the microbes die. Ambrosia can be used straight, they prefer not to dilute it, but it can be diluted (no more than 4 parts to 1) to cover more area. “Just sprinkle it around your garden,” George says. You don’t need to “water” with it.

Biochar, as mentioned previously on Gardenerd, does many things to benefit soil. It holds nutrients and moisture, among other things. It captures carbon and ammonia in compost bins and manures. Organic Solution combines biochar with castings (their Vermachar product) and hydrates it with extract (Ambrosia). The result is a highly effective product that brings plants and soil to life.

The guys were kind enough to give me some samples to try out on my ailing citrus trees. I will be reporting my findings in the spring. In the meanwhile, visit their online store and spread the word about this worthwhile endeavor in organic agriculture.