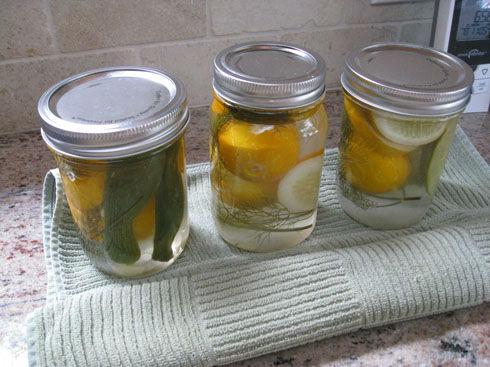 Last week’s Tip of the Week podcast introduced you to my mother’s delicious dill pickle recipe.  This week we tried our hands at making them with home grown Lemon Cucumbers.  Tension mounted at the thought of doing it for the first time without Mom there to guide, but a few phone calls along the way made it easy.

We started with freshly picked Lemon Cucumbers (and an Early Russian straggler).  We soaked them over night in cold water. 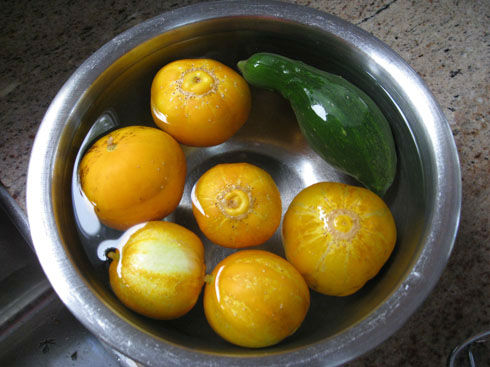 Mom says it plumps them up and helps keep them crispy

Then we sterilized pint-sized jars in boiling water and prepared the rest of the ingredients. Mom uses quarts but we didn’t have a large harvest. 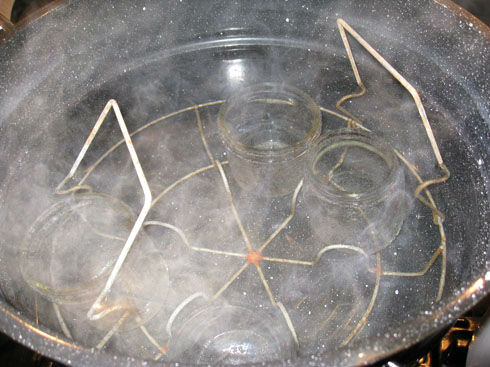 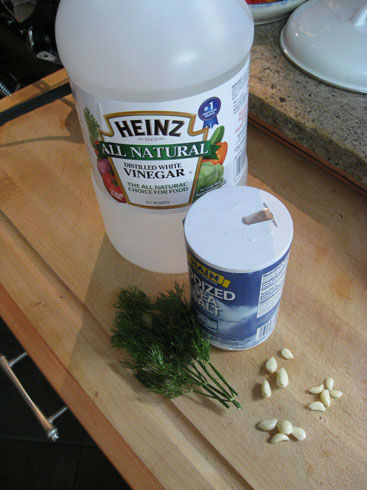 We used home grown garlic and dill, with sea salt and vinegar.

Some canning people say to use canning salt to prevent cloudiness in the brine, but ours came out clear as a bell with no foam on top just fine with regular sea salt. We used the smaller garlic cloves from the garden, so we needed more than just 1 or 2 per pint.

Next we brought the water and salt and vinegar to a boil on the stove and stuffed the jars with ingredients. Hint: open a few windows or your house will smell like vinegar for weeks! 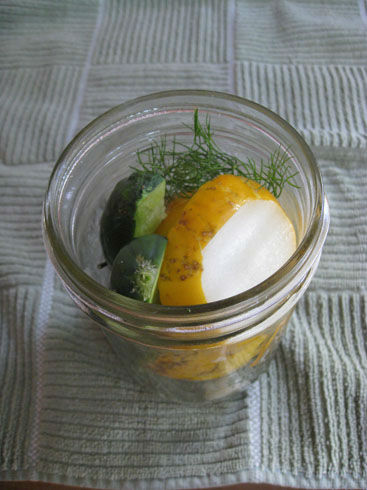 A sprig of dill and a some garlic at the bottom, add cucumbers sliced how you like them (we did one whole, one quartered, and one sliced for variety. Then another sprig of dill at the top.

Then the jar is set into a bowl to catch spills, and hot brine is poured into the jars until it overflows. 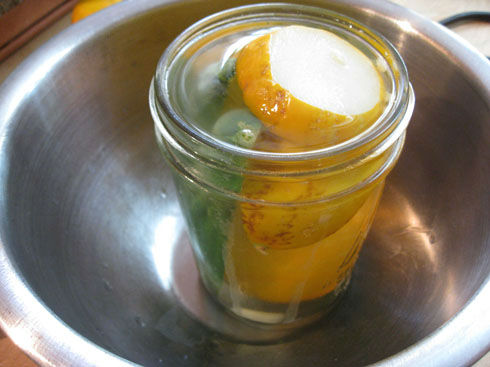 Wipe the rim to remove any salt that is crystallizing and put on a lid that has been soaking in hot water for 3 minutes.  Screw the cap on and you’re done!

Leave them on a towel overnight to make sure they seal.

Mom Jo puts them upside down on a towel to help ensure sealing, but ours sealed right away, so there was no need.  Now we wait about 3 months for the brine to work its magic.

And now, the official recipe for Mom Jo’s Dill Pickles:

How to:
Wash cucumbers and soak in cold water overnight
Sterilize jars in a water bath
Sterilize seals (lids) in water that has been boiled (but isn’t on the heat) for 3 minutes just before filling the jars. (If heated too long the rubber deteriorates)

Combine vinegar, water and salt and bring to a boil.
Take one jar at a time out of the water bath, place 1-2 pieces of dill and 1-2 cloves of garlic at the bottom of the jar.
Pack the jar with cucumbers, add another sprig of dill and a garlic clove to the top.
Place the jar in a bowl to catch overflowing brine and fill to overflowing with brine.
Wipe the rim of the jar, place a seal on top and screw on the lid tightly.
Place upside down on a towel

3 months is the suggested wait time, but you can try sooner.

Mom’s helpful hints:
Peel the garlic the night before
Turn brine on after jars start boiling
Put the overflow brine back in the pot to boil and use
If jars don’t seal, put them in the fridge until ready to use