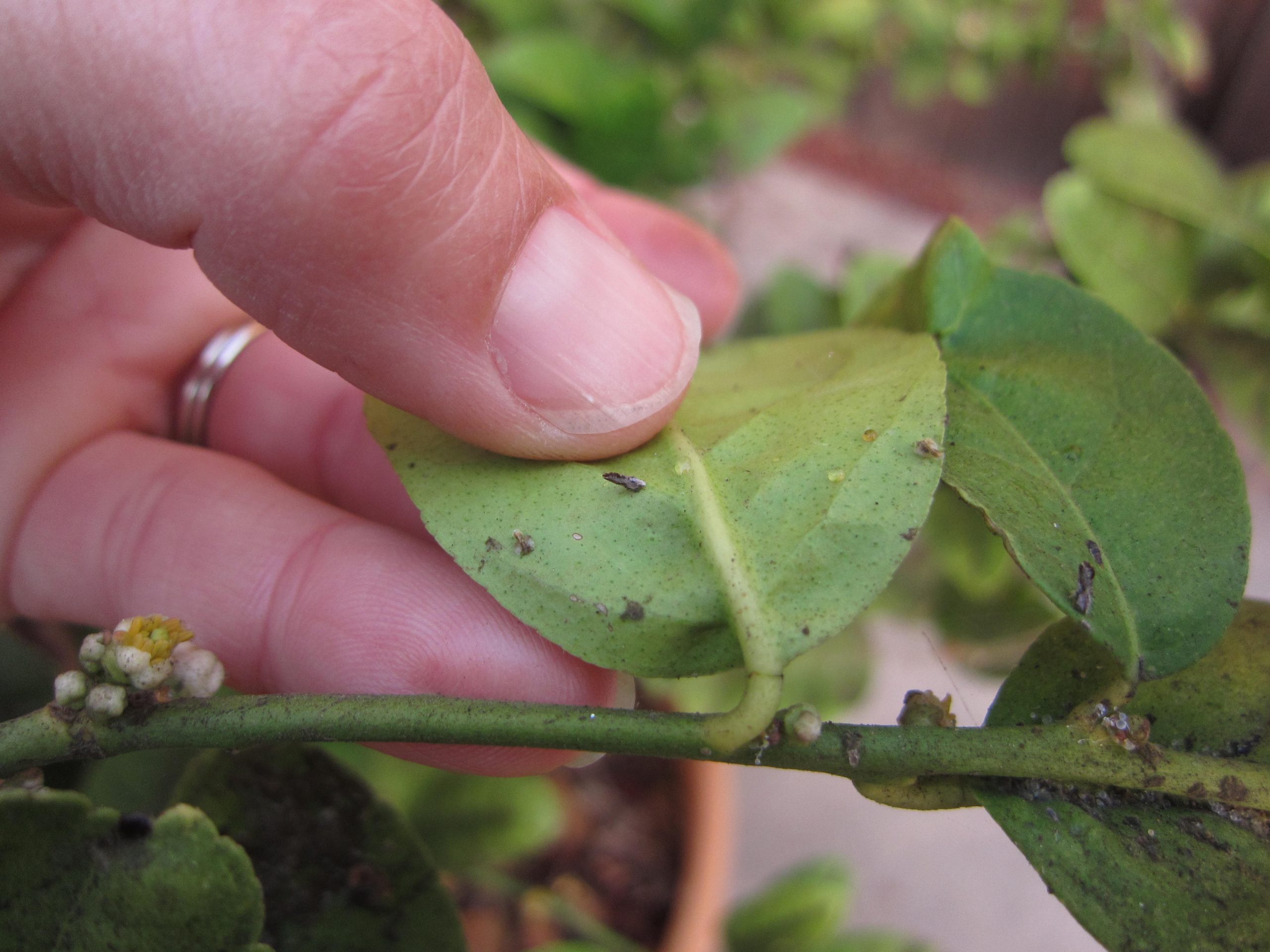 The pest looks like a tiny figure eight or an hourglass standing upright on a leaf.

It’s here, in Mar Vista, in our backyard. The Asian citrus psyllid (ACP) has been in found in Los Angeles, but just last week we discovered it on a weak lime tree in the back corner of Gardenerd HQ. Here’s what it looks like in real life.

At first we didn’t see the pest, just evidence that it arrived. Squiggly, white threads were sprinkled over the leaf surfaces and dangled off flower buds. It’s like a horror film where the teenager in a remote cabin notices a note drawn in the steam on the bathroom mirror. Foreboding at best, deadly at worst.

It took a magnifying glass to find the pest (yes, middle-aged eyes will need some assistance here). From the pictures we had seen on CaliforniaCitrusThreat.org we really didn’t get the sense of how small these little buggers are. Here’s a thumb for reference below. You can see one ACP just below the fingernail, and one prominently displaying its hourglass shape standing on the leaf to the right of the one we’re holding.

Once we knew what to look for we could see they were clustered in one main section of the tree. They jump sharply away when you touch them if they aren’t attached to the leaf at the mouth-parts.

We immediately began researching the spread of ACP and Huanglongbing (HLB), the fatal disease it carries. This website shows an interactive map of infested areas. It also includes layers of information for where HLB has been detected. Lucky for us, HLB has not yet reached the Los Angeles westside.

The map also shows where the natural predator of the ACP has been released in hopes of defeating this pest. Tamarixia radiata is a parasitic wasp that makes ACP a host for its young and has the potential for keeping the pest under control.

We were delighted to see that the state decided to use a natural biological control rather than attempting to use pesticides to kill the bug. We tried calling the folks at Disease Prevention to ask if we could get our hands on some Tamarixia radiata to release in our backyard. They told us they don’t release upon request.

The map shows that Tamarixia has been released within a few miles of Gardenerd HQ, but we’ll try again to get our hands on the parasitic wasp until we’re covered. In the meantime, we’re ensuring we have plenty of umbels flowering in the yard to attract parasitic wasps. We’ve also applied compost tea to the leaves in hopes that some other microbe has a taste for the exotic. We’ll see.