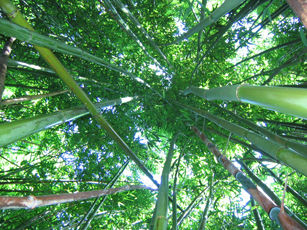 Oh, the trouble with bamboo… here’s a question that came in this week on the subject:

“I attended a class of yours a few years ago. Since then, we had a
planter built in my yard out of railroad ties. There was a think fabric
base placed underneath to block out weeds and bugs. As we prepared for
spring planting this week, we discovered that bamboo has infiltrated
everything. It grew under the fabric base and worked it’s way through to
my wonderful soil. The soil was completely invaded and became root
bound. Would you have any suggestions? We would love to stop the bamboo
from growing under the planter, but that seems impossible. We were
thinking of building up the sides of the planter and placing the new
soil mix on top of a platform that is set off the ground. Do you think
this may work or have you encountered this problem in other places?”

Oh boy – bamboo
is utterly persistent.  I’ve had to dig some out myself and it’s quite a
job.  I highly recommend getting a pick-axe and someone with a good
back to dig it out, then install a vertical root barrier on the invasive
side(s).  That will keep it from coming back.If you choose to just
build up, I believe  will eventually find its way to the surface
again.  I’ve
seen someone’s compost bin (which is 4 feet tall) with bamboo growing
out the top of it.  The homeowner had to cut the compost bin away from the bamboo
because it had grown 20 feet tall. You can find information about root barriers here:
http://centuryrootbarrier.com/root-barrier-rolls/
Google Search for Root Barriers for Sale
There are
alternative bamboos that don’t run as badly – like clumping bamboo
varieties – if you feel like replacing the bamboo down the line with
something less invasive:
http://www.beautifulbamboo.com/clumpingbamboo.php

Another quick note – regarding the use of railroad ties around food crops:That material is generally soaked in either creosote or an crude oil of some kind.  You really don’t want that around your food.  Since we’re already talking about the possibility of building up, I would highly recommend replacing those railroad ties with something less toxic, like some cedar, which is naturally resistant to degradation.  Pressure treated lumber is also toxic, so if it’s green, I’d stay away from it.It sounds like you have a bit of a project ahead of you.    I hope these suggestions help with your situation. Good luck and keep us posted!

Does anyone have other suggestions for controlling bamboo?  Share them with us here.