Recently Vermont became the first state to pass a GMO labeling law. That means that genetically engineered ingredients must be labeled as such on packaged foods sold in Vermont beginning July 1, 2016. It’s a landmark victory against Monsanto and Big Food, and IMHO the start of something big. Vermont now has the right to know. Shouldn’t everyone? (March with me on May 24th if you answered yes!)

However, word on the street this week is that the Grocery Manufacturers Association (GMA) is planning to sue Vermont to try and stop the law from going into effect. (You may recall that the GMA was sued for money laundering during Washington State’s I-522 battle to label GE ingredients, funneling millions into negative ad campaigns from companies like Coke, Pepsi, Nestle and General Mills, that eventually led to a ‘no’ vote.) This is dirty business, people. I hope you’re paying attention.

The GMO labeling issue is just one beef I have with Monsanto. Let’s talk about the others:

Seeds: As gardeners, we understand that whoever owns seeds, controls the food supply. Seed-saving is the bread and butter of any farmer’s business, but Monsanto’s GE seeds are patented, so farmers can’t save them to plant again next season. Not only that, but Monsanto and its subsidiaries have been buying up ordinary seed companies, and in turn, patenting any hybrid seeds (that’s right, non-GMO seeds) that are proprietary to that company. Those companies then give preferential space in their catalogs to these patented hybrid seeds over free-to-save heirloom and open pollinated (OP) varieties. This is leading to heirloom and OP seed species extinction.

Cross-contamination: Nature is powerful, and she isn’t always tidy. Pollen travels, sometimes miles, and it’s been shown that GE pollen can easily cross-contaminate non-GE species that are nowhere near GE field crops. Once that happens, the resulting seed is not longer pure, and can no longer be sold to gardeners like you and me. This hurts everyone, the farmer, the consumer, and our seed supply.

Health: There are a myriad studies showing the effects of genetically engineered foods on the human body. There is also a direct correlation to the increase in pesticide & herbicide use with the introduction of GE crops to combat superbugs and superweeds. Food allergies have increase in concert with GE crop increases. Yet still they remain in widespread use.

Does this make you angry? It makes me furious. So here’s my wish:

I want 100 people to pledge to March Against Monsanto with me on May 24th. It doesn’t matter where; there are events happening all over the world. I’ll be at this one. Will you join me? I attended last year’s march and it was exciting and promising, but I want not just hundreds, but hundreds of thousands, to come out. You eat food, your kids eat food, yes? Then stand up and let your voice be heard. Join me in Marching Against Monsanto on May 24th everywhere. 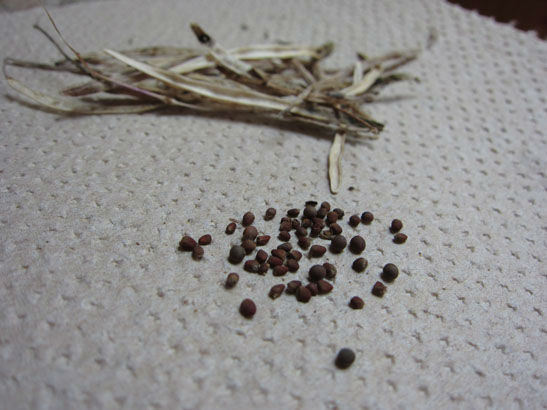 Stand up for seed freedom! Find an event near you. Pick your place and post your pledge to attend below in the comments section.

Bagrada Bugs on the Loose